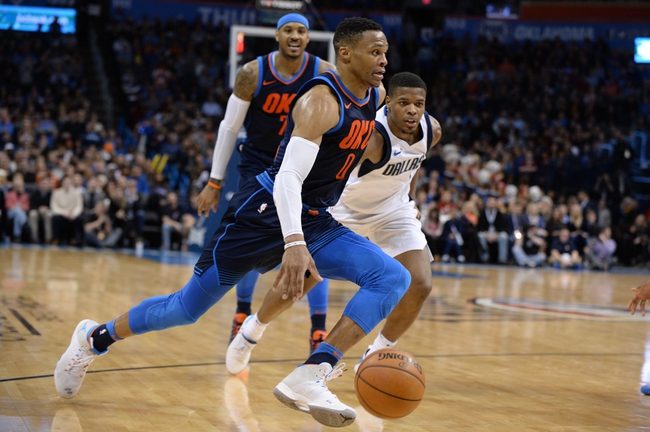 The Dallas Mavericks play host to the Oklahoma City Thunder at the American Airlines Center on Wednesday night.

The Oklahoma City Thunder have been in decent form as they’ve won four of their last six games and they will be looking to build on Monday’s 112-105 home win over the Magic. Paul George led the team with 26 points and eight rebounds, Steven Adams added 16 points while Russell Westbrook racked up eight points with 12 rebounds and 11 assists. As a team, the Thunder shot 47 percent from the field and 11 of 25 from the three-point line but they really had to lean on their bench players who combined for 48 points as Carmelo Anthony and Westbrook combined to shoot just seven of 27 from the field. With the win, Oklahoma City improved to 35-27 overall and 21-10 at home.

Meanwhile, the Dallas Mavericks have been in a real slump as they’ve lost 11 of their last 14 games but they will be feeling pretty good about themselves after putting an end to a four-game skid with a 109-103 home win over the Pacers on Monday. Harrison Barnes led the team with 21 points, JJ Barea provided the spark off the bench with 19 points and nine assists while Doug McDermott chipped in with 15 points in just 16 minutes of action. As a team, the Mavericks shot 45 percent from the field and 14 of 37 from the three-point line as they poured on 41 points in the fourth quarter to escape with the narrow victory in a game that closely contested throughout. With the win, Dallas improved to 19-42 overall and 12-19 at home.

These two teams have already met three times this season and surprisingly, it is the Mavericks who lead the season series by 2-1. Going on recent form, there’s no doubt that the Thunder are clearly the team who’ve been playing better lately but the Mavericks will be quietly confident of their chances after taking down the pacers on Monday. The home team has covered in five of the last six meetings so I’m sticking with the Mavericks and the points in a game they could win outright.