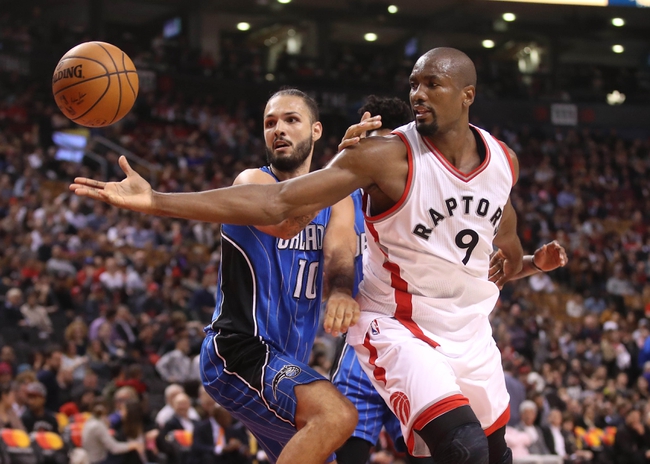 The Toronto Raptors and the Orlando Magic duke it out at the Amway Center on Wednesday night.

The Toronto Raptors have been on a tear lately as they’ve won 10 of their past 12 games and they will be looking to stay hot after making light work of the Pistons in a 123-94 home win on Monday. Kyle Lowry scored 20 points with four assists, DeMar DeRozan added 20 points with seven assists while Serge Ibaka chipped in with 19 points and nine rebounds. As a team, the Raptors shot a healthy 52 percent from the field and 17 of 38 from the three-point line as they dominated the second half by 64-41 to make it look easy after a tightly contested first half. Once again, the bench played a major role as they combined for 54 points which meant that none of the starters played more than 25 minutes except for DeRozan who played 29 minutes. With the win, Toronto improved to 42-17 overall and 25-5 at home where they have won eight of their last nine.

Meanwhile, the Orlando Magic have been in a real slump as they’ve lost 10 of their last 14 games and they will be hoping to snap a six-game losing streak after falling to the Thunder in a 112-105 road loss on Monday. Evan Fournier and Jonathan Simmons led the team with 19 points apiece, Aaron Gordon added 18 points on seven of 20 shooting while Nikola Vucevic chipped in with 15 points. As a team, the Magic shot 46 percent from the field and 12 of 29 from the three-point line but their offense cooled off in the second half where they shot just 37 percent from the field. With the loss, Orlando dropped to 18-42 overall and 7-25 on the road where they have lost three in a row.

These two teams have yet to butt heads this season but there’s no doubt which of these two teams has been playing better lately. The Raptors have been one of the hottest teams in the league for a while now and you have to be impressed by their depth as they don’t seem to skip a beat when they go to their second unit. I can’t say the same for the Magic just haven’t been able to buy a win lately, but it’s not like they’re always getting blown out as only one of their last six games by more than seven points. The betting trends suggest are in favor of the Magic as they’ve covered in six of the last eight meetings, but I’m sticking with the Raptors to stay hot as their depth should be too much in this one.