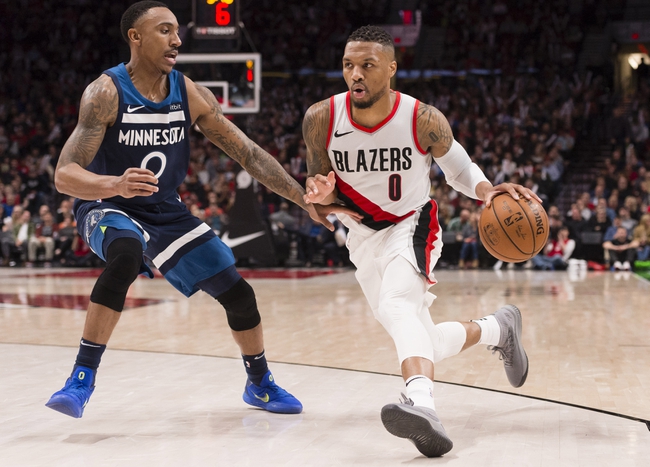 The Minnesota Timberwolves and the Portland Trailblazers duke it out at the Moda Center on NBA Thursday.

The Minnesota Timberwolves have been in decent form as they’ve won four of their last six games and they will be aiming for a third straight win after blowing past the Kings in a 118-100 road win on Monday. Karl-Anthony Towns led the team with 26 points, 17 rebounds and four assists while shooting nine of 10 from the field, Andrew Wiggins added 22 points while Jeff Teague chipped in with 20 points and seven assists. As a team, the Timberwolves shot 52 percent from the field and seven of 16 from the three-point line as they outscored the Kings by 34-17 in a dominant third quarter to run away with their second double-digit win in a row to improve to 38-26 overall and 13-19 on the road where they had lost seven in a row before Monday’s win.

Meanwhile, the Portland Trailblazers have been in great form as they’ve won six of their past seven games and they will be gunning for a fifth straight win after blowing past the Kings in a 116-99 home win on Tuesday. Damian Lillard continued his strong form with 26 points and 12 assists, Shabazz Napier added 20 points and four assists off the bench and Jusuf Nurkic chipped in with 17 points. As a team, the Trailblazers shot a healthy 52 percent from the field and 15 of 34 from the three-point line as they pulled away in the fourth quarter after the Kings cut a 17-point deficit to just eight points. With the win, Portland improved to 35-26 overall and 18-11 at home.

The Timberwolves have looked pretty good in their first two games since losing Jimmy Butler to that knee injury, but this will be their first real test as the Trailblazers have been in red-hot form lately. The Trailblazers have won 11 of their last 12 home games and they have covered the spread in five of their last seven while the Timberwolves continue to struggle on the road where they have covered in just three of their last 13 games. I’m sticking with Lillard and the Blazers to stay hot with another win and cover in this one.