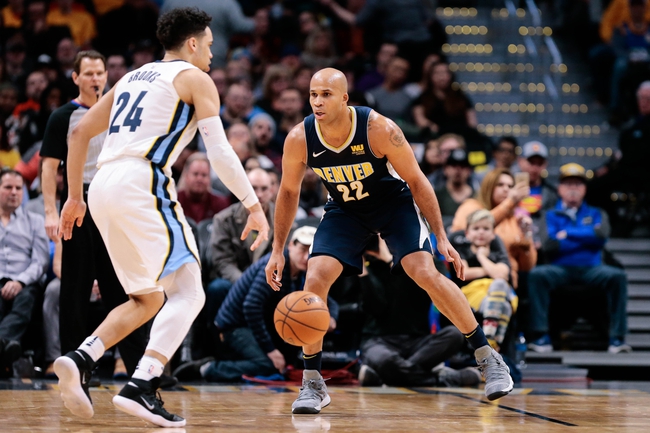 The Denver Nuggets pay a visit to the FedExForum to battle the Memphis Grizzlies on Friday night.

The Denver Nuggets have been solid lately as they’ve won seven of their past 10 games but they will be hoping to bounce back after falling to the Clippers in a 122-120 home loss on Tuesday. Gary Harris led the team with 23 points, Will Barton added 19 points with five assists while Wilson Chandler, Nikola Jokic and Jamal Murray each scored 18 points apiece. As a team, the Nuggets shot 49 percent from the field and 10 of 31 from the three-point line as they dominated the Clippers to lead by as many as 19 points in the third quarter before the Clippers poured in 41 points in the fourth quarter to snatch the game from the Nuggets. With the loss, Denver dropped to 33-28 overall and 24-9 at home.

Meanwhile, the Memphis Grizzlies just haven’t been able to buy a win these days as they’ve lost 13 of their last 14 games and they will be aiming to snap an 11-game skid after falling to the Suns in a 110-102 home loss on Wednesday. Marc Gasol led the team with 22 points, 13 rebounds and four blocks, Andrew Harrison added 20 points with seven assists while Jarell Martin chipped in with 16 points and five assists off the bench. As a team, the Grizzlies shot just 38 percent from the field and 13 of 31 from the three-point line but they committed 20 turnovers which really cost them as the Suns dominated the second and third quarters by a combined 61-45 to take a 10-point lead going into the fourth quarter. With the loss, Memphis dropped to 18-42 overall and 13-19 at home.

The Nuggets have been in pretty good form as they’ve won seven of their last 10 games and they really should’ve won on Tuesday as they actually led by 7 points going into the final minute of the game. However, the Nuggets are just 9-19 on the road so far this season but it’s just too hard to back the Grizzlies the way they’ve been playing as they’ve lost 11 in a row with six of those losses coming by double digits. The road team has covered in five of the last seven meetings and I think that trend continues with the Nuggets winning in this one.