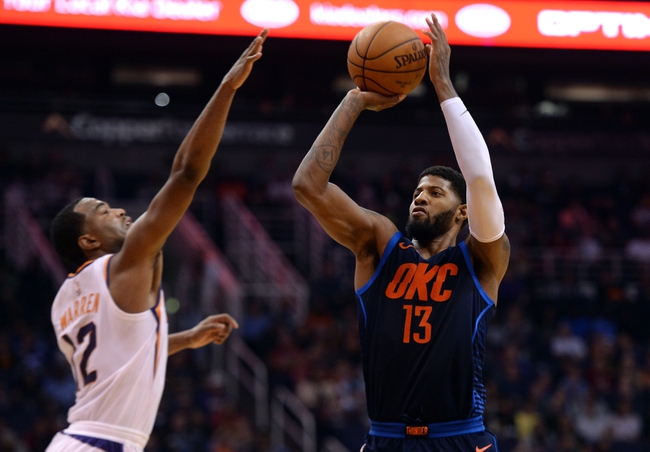 The Oklahoma City Thunder and the Phoenix Suns duke it out at the Talking Stick Resort Arena on Friday night.

The Oklahoma City Thunder have been in solid form lately as they’ve won six of their past nine games and they will be aiming for a third straight win after sneaking past the Mavericks in a 111-110 overtime win on Wednesday. Russell Westbrook led the team with 30 points, 11 rebounds and seven assists, Paul George added 23 points with 11 rebounds and six assists while Carmelo Anthony chipped in with 12 points. As a team, the Thunder shot 45 percent from the field and 10 of 36 from the three-point line but it was a one-man show in crunch time as Westbrook scored seven of the team’s 11 points in overtime. With the win, Oklahoma City improved to 36-27 overall and 15-17 on the road.

Meanwhile, the Phoenix Suns have been in terrible form as they’ve lost 15 of their last 17 games but they were able to snap a 10-game skid with a 110-102 road win over the Grizzlies on Wednesday. Devin Booker led the team with 34 points and six assists, Josh Jackson added a career-high 29 points while Elfrid Payton chipped in with 19 points, 10 rebounds and four assists. As a team, the Suns shot 45 percent from the field and a miserable six of 21 from the three-point line but they forced the Grizzlies into nine turnovers in the first quarter leading to 20 turnovers for the game. With the win, Phoenix improved to 19-44 overall and 10-21 on the road where they had lost eight in a row before Wednesday.

The Suns were able to break a 10-game losing streak with a win over the Grizzlies in their last outing, but no one is losing to the Grizzlies these days so that’s not too impressive. However, while the Thunder have been in decent form lately, they’ve only covered in one of their last five road games and have already lost to the Suns by 114-100 in the team’s only meeting back on Jan 17. I’m sure the Thunder get the win but I’m taking the Suns with the points at home in what should be a shootout.