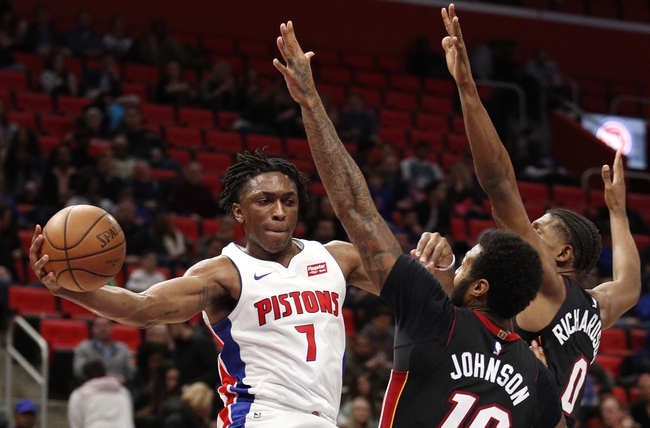 The Detroit Pistons and the Miami Heat do battle at the American Airlines Arena on Saturday night.

The Detroit Pistons have lost seven of their past nine games and they will be looking to bounce back after last night’s 115-106 overtime loss at Orlando. Reggie Bullock and James Ennis each scored 21 points, Blake Griffin racked up 12 points with 10 rebounds and nine assists while Andre Drummond chipped in with 10 points and 15 rebounds. As a team, the Pistons shot 43 percent from the field and 12 of 29 from the three-point line but they simply went ice-cold when they least needed it as they scored just two points in the overtime period. With the loss, Detroit fell to 29-33 overall and 9-20 on the road where they have now lost seven in a row.

Meanwhile, the Miami Heat have lost nine of their last 12 games and they will be hoping to bounce back after getting routed by the Lakers in a 131-113 home loss on Thursday. Dwyane Wade led the team in scoring with 25 points off the bench, Goran Dragic added 19 points with seven assists while Justise Winslow chipped in with 17 points. As a team, the Heat shot 48 percent from the field and nine of 31 from the three-point line but they were always playing from behind after the Lakers poured in 40 points in the second quarter to take an 11-point lead going into halftime. The Heat just weren’t themselves on the defensive end as they allowed the Lakers to shoot 59 percent from the field and 16 of 29 from the three-point line. With the loss, Miami dropped to 32-30 overall and 16-13 at home.

Head to head, the over is 6-1 in the last seven meetings and the home team is 4-1 ATS in the last five meetings.

The Pistons have really fallen off the pace lately as they’ve won just two of their past nine games and they will still be kicking themselves after falling flat on their faces in last night’s overtime loss, but the Heat have been in a rough patch themselves and they’ve only covered in eight of their last 34 home games. This one is tough to pick, but the Pistons have struggled on the road all season and they will be playing this one on zero days’ rest, so I’m leaning towards the Heat to get the win and cover here.