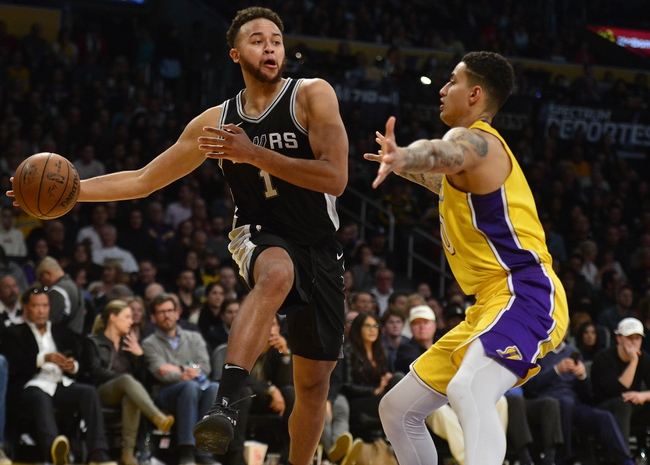 The Los Angeles Lakers and the San Antonio Spurs collide at the AT&T Center on Saturday night.

The Los Angeles Lakers have been on a bit of a roll as they’ve won eight of their last 11 games and they will be gunning for a fifth straight win after blowing past the Heat in a 131-113 road win on Thursday. Isaiah Thomas led the team with 29 points and six assists off the bench, Julius Randle added 25 points while Brandon Ingram and Kentavious Caldwell-Pope scored 18 and 16 points respectively. As a team, the Lakers shot a sizzling 59 percent from the field and 16 of 29 from the three-point line as they outscored the Heat by 40-26 in the second quarter to lead by 11 points at halftime before pulling away in the fourth. Lonzo Ball continues his stellar play since his return from injury as he racked up eight points with six rebounds, seven assists and six steals. With the win, LA improved to 27-34 overall and 12-20 on the road.

Meanwhile, the San Antonio Spurs have been going through a real rough patch as they’ve lost seven of their past nine games and they will be looking to bounce back after falling to the Pelicans in a 121-116 home loss on Wednesday. Rudy Gay led the team in scoring with 19 points off the bench, Dejounte Murray added 18 points with nine rebounds and five assists while LaMarcus had eight points before leaving the game with an ankle sprain. As a team, the Spurs shot 48 percent from the field and actually led by 105-97 with 8:55 on the clock until the Pelicans took over and closed the game on a 24-11 run. With the loss, San Antonio dropped to 36-26 overall and 22-7 at home.

Head to head, the over is 7-2 in the last nine meetings overall but the under is 20-9 in the last 29 meetings in San Antonio.

Aldridge has been listed as doubtful for this game which is a big blow to a Spurs team that’s already missing Kawhi Leonard, but Kyle Anderson has shown he’s capable of filling in. However, the young Lakers have really been playing well lately and they’ve covered in each of their last four road games, so I’m taking the Lakers and the free points in an upset.