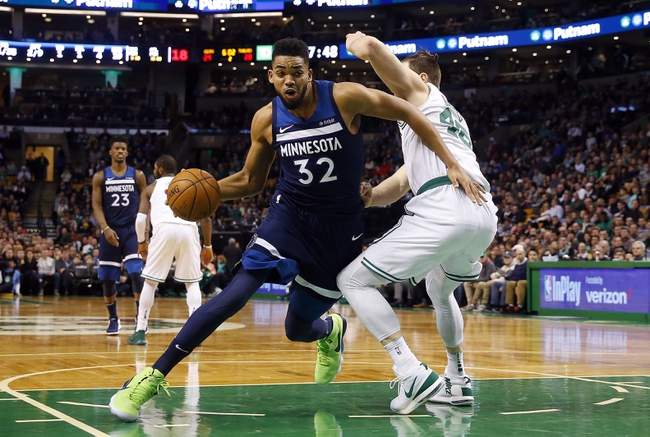 The Minnesota Timberwolves play host to the Boston Celtics at the Target Center on Thursday night.

The Boston Celtics have been in great form as they’ve won five of their last six games and they will be looking to stay hot after blowing past the Bulls in a 105-89 road win on Monday. Jaylen Brown led the team with 21 points on nine of 13 shooting, Jayson Tatum added 14 points while Terry Rozier and Al Horford scored 13 points apiece. As a team, the Celtics shot 48 percent from the field as they absolutely dominated the Bulls in the early going to lead by as many as 37 points, all without their leading scorer in Kyrie Irving who was rested for the game due to knee soreness. With the win, Boston improved to 45-20 overall and 22-9 on the road.

Meanwhile, the Minnesota Timberwolves have lost six of their past 10 games and they will be hoping to avoid a third straight loss after falling to the Jazz in a 116-108 road loss on Friday. Andrew Wiggins led the team with 27 points on 10 of 19 shooting, Jeff Teague added 25 points while Karl-Anthony Towns scored just 13 points. As a team, the Timberwolves shot 51 percent from the field and nine of 17 from the three-point line, but they really shot themselves in the foot a couple times in this game as Towns was ejected in the second quarter after receiving his second technical for complaining to the referee while Teague was ejected late in the game for his flagrant foul on Ricky Rubio. With the loss, Minnesota dropped to 38-28 overall and 13-21 on the road.

Irving sat out on Monday’s game due to knee soreness but he is expected to be ready for Thursday which is a great boost for the Celtics who are fighting to stay in contention for the top seed in the Eastern Conference. The Timberwolves have covered in 11 of their last 14 home games but they’ve lost two games in a row and have failed to cover in each of their last five games against teams with winning records. The Celtics have already beaten the Timberwolves by 91-84 in the team’s lone meeting back on Jan 5 and I’m expecting more of the same as the Celtics should again be too good for the Timberwolves.