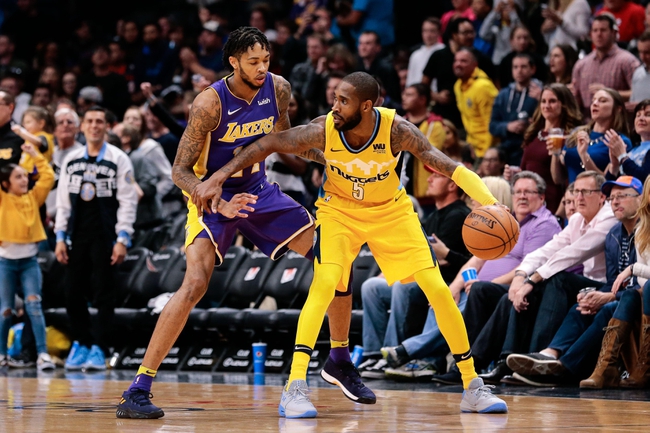 The Los Angeles Lakers invade the Pepsi Center to battle the Denver Nuggets on Friday night.

The Los Angeles Lakers have been in great form as they’ve won six of their last seven games and they will be looking to stay hot after sneaking past the Magic in a thrilling 108-107 home win on Wednesday. Brook Lopez led the team with 27 points on 12 of 18 shooting, Kyle Kuzma finished with a double-double of 20 points with 10 rebounds, Lonzo Ball added 16 points with five assists while Isaiah Thomas chipped in with 13 points and nine assists off the bench. As a team, the Lakers shot 49 percent from the field and 11 of 33 from the three-point line as they rallied in the fourth quarter to lead by as many as 12 points before the Magic went on a 20-7 run to steal the lead. Fortunately, the Lakers turned to Lopez who drained the game-winning free throws with just 0.6 seconds left in the game until a clock error ultimately robbed the Magic of a chance to steal the game at the buzzer. With the win, Los Angeles improved to 29-35 overall and 16-15 at home.

Meanwhile, the Denver Nuggets were in great form when they won seven of eight but they’ve cooled off recently with just two wins in their last six outings and they will now be aiming to avoid a third straight defeat after falling to the Cavaliers in a 113-108 home loss on Wednesday. Nikola Jokic dominated the game with 36 points, 13 rebounds and six assists while shooting 12 of 14 from the field, Gary Harris added 18 points while Paul Millsap and Mason Plumlee chipped in with 12 points apiece. As a team, the Nuggets shot 48 percent from the field and 10 of 27 from the three-point line as they showed plenty of fight to rally back from a 16-point first-half deficit, but they just had no answer for LeBron James who scored nine points down the stretch to finish with 39 points and 10 assists for the game. With the loss, Denver dropped to 35-30 overall and 24-10 at home.

The season series is tied at one game apiece but the Nuggets won the most recent meeting by 115-100 at home win back on Dec 2. The Lakers were somewhat lucky to escape with a narrow win over the lowly Magic in their last outing, but they’ve been a pretty good road team lately as they’ve covered in each of their last five road games while the Nuggets have failed to cover in each of their last four home games. The Nuggets are deserved favorites at home, but I’m taking the Lakers with the points in a game they could win outright.