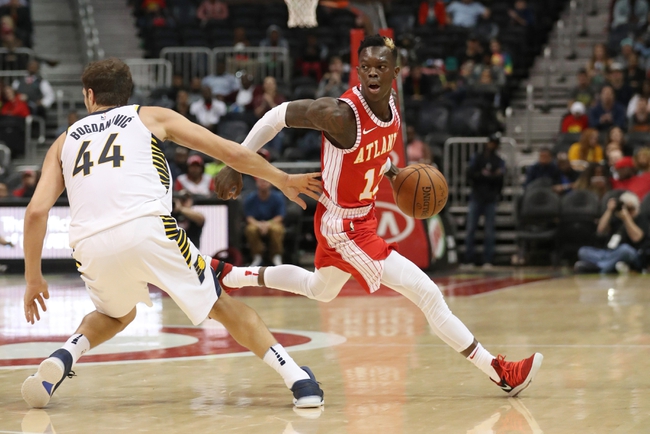 The Atlanta Hawks and the Indiana Pacers collide in NBA action at Bankers Life Fieldhouse on Friday night.

The Atlanta Hawks have been in a slump lately as they’ve lost eight of their last 11 games and they will be looking to bounce back after falling to the Raptors in a 106-90 road loss on Tuesday. Kent Bazemore led the team with 14 points and five assists, John Collins added 14 points while Dewayne Dedmon chipped in with 12 points and 10 rebounds. As a team, the Hawks shot 42 percent from the field and six of 21 from the three-point line but they were actually surprisingly competitive for three quarters until the Raptors took over in the fourth quarter where they were outscored by 30-13. With the loss, Atlanta dropped to 20-45 overall and 5-26 on the road.

Meanwhile, the Indiana Pacers have been in decent form as they have won seven of their past 10 games but they will be aiming to bounce back after having their three-game win streak snapped by the Jazz in a 104-84 home loss on Wednesday. Myles Turner led the team with 24 points on 10 of 14 shooting, Bogdan Bogdanovic and Victor Oladipo each scored 13 points while Cory Joseph chipped in with 12 points. As a team, the Pacers shot 38 percent from the field and a miserable three of 23 from the three-point line but they were always fighting an uphill battle after falling behind by as many as 16 points midway through the second quarter. With the loss, Indiana dropped to 37-28 overall and 22-12 at home.

The Hawks really did look pretty good in their last outing as they were right there with the red-hot Raptors until they unravelled in the fourth quarter. Meanwhile, the Pacers had reeled off three straight wins before falling flat on their faces against the Jazz who have been one of the hottest teams in the league lately. The Pacers are leading the season series by 2-1 but the Hawks did win by 107-102 back on Dec 20. I haven’t been too hot on the Pacers this season, but they’ve been playing well and should be more than good enough to beat this Hawks team who are just playing out the season.