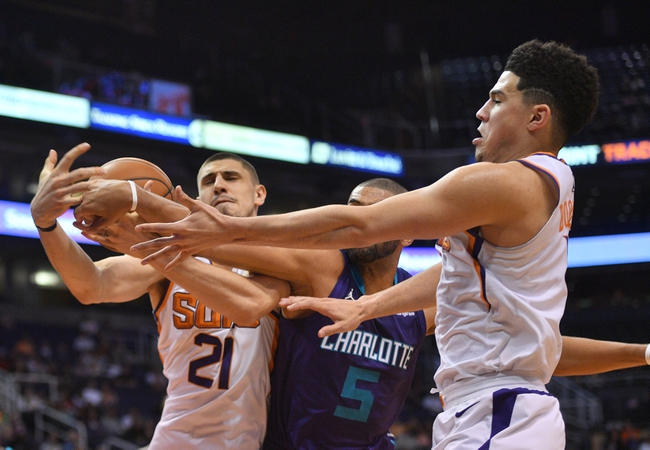 The Phoenix Suns pay a visit to the Spectrum Center to battle the Charlotte Hornets on Saturday night.

The Phoenix Suns have really been struggling lately as they’ve lost 14 of their last 15 games and they will be hoping to snap a four-game skid after falling to the Thunder by 115-87 on Thursday. Devin Booker led the team with 30 points on 10 of 22 shooting, while Tyson Chandler chipped in with 10 points, but no one else finished in double figures. As a team, the Suns shot just 33 percent from the field and nine of 37 from the three-point line but they just didn’t have a chance after falling behind by 11 points at halftime. There was no stopping the Thunder’s Russell Westbrook who poured in 27 points on an efficient 11 of 14 from the field and it didn’t help that the Suns were without their second leading scorer in TJ Warren who is listed as doubtful with a back injury.

Meanwhile, the Charlotte Hornets could really do with a win as they’ve now lost five straight following their 125-111 home loss to the Nets on Thursday. Kemba Walker led the team with 21 points, Dwight Howard added 19 points while Jeremy Lamb chipped in with 15 off the bench. As a team, the Hornets shot 48 percent from the field and a miserable four of 19 from the three-point line but it felt like they were always trailing in this one after the Nets set the tone with 35 points in the first quarter. With the loss, Charlotte dropped to 28-38 overall and 18-17 at home.

The Suns were already struggling to win games before losing Warren to injury, but now they just can’t buy a win. With that being said, the Hornets have been in poor shape themselves and they didn’t look good in their loss to the Nets, so I can’t just feel comfortable about laying this many points. This is a game I’d rather steer clear of, but if I had to choose I’d go with the Suns and the points.