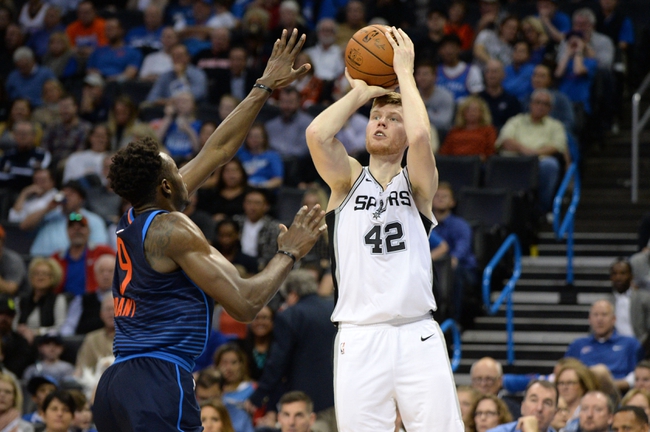 The San Antonio Spurs and the Oklahoma City Thunder duke it out at the Chesapeake Energy Arena on Saturday night.

The San Antonio Spurs haven’t been playing too poorly lately but they’ve been on the wrong end of plenty of close games over the last month as they’ve lost seven of their past nine games. In Thursday’s 110-107 loss at Golden State, LaMarcus Aldridge led the team with 30 points, 17 rebounds and four assists, Dejounte Murray added 14 points with six assists while Kyle Anderson chipped in with 12 points, 11 rebounds, four assists and five steals. As a team, the Spurs shot 45 percent from the field but just six of 22 from the three-point line as they dominated the second and third quarters before getting outscored by 32-20 in the fourth quarter against a Warriors team who lost Stephen Curry to an ankle sprain right at the start of the game. With the loss, San Antonio dropped to 37-28 overall and 14-20 on the road.

Meanwhile, the Oklahoma City Thunder have won eight of their last 13 games and they will be feeling pretty good after snapping a two-game skid with a clinical 115-87 home win over the lowly Suns. Russell Westbrook steered the team with 27 points on 11 of 14 shooting with eight rebounds and nine assists, Paul George added 21 points while Steven Adams chipped in with 16 points and 12 rebounds. As a team, the Thunder shot 52 percent from the field while holding the Suns to just 33 percent as they never looked back after taking a double-digit lead in the second quarter. With the win, Oklahoma City improved to 38-29 overall and 22-11 at home.