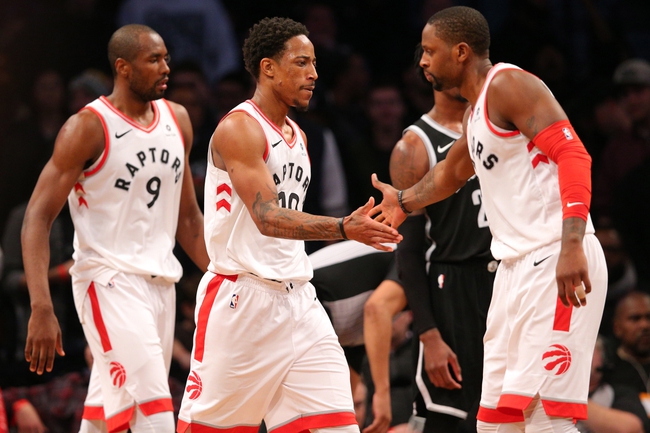 The Toronto Raptors look to stay hot when they visit the Brooklyn Nets at the Barclays Center on Tuesday night.

The Toronto Raptors have been on fire lately as they’ve won 15 of their last 16 games and they will be gunning for a ninth straight win after blowing past the Knicks in a 132-106 road win on Sunday. Jonas Valanciunas led the team in scoring with 17 points, Kyle Lowry added 16 points with seven assists while Serge Ibaka chipped in with 14 points. Kyle Lowry shot just four of 16 for his nine points but they didn’t needed much from him as the Raptors shot 50 percent from the field and 16 of 35 from the three-point line. The game was pretty close in the first half but there was just no keeping up with the Raptors’ second unit who combined for 69 points. With the win, Toronto improved to 49-17 overall which keeps them 3.5 games clear of the second-placed Celtics in the Eastern Conference standings.

Meanwhile, the Brooklyn Nets have been in a real slump as they’ve lost 13 of their last 15 games and they will be looking to bounce back after getting blown out by the 76ers in a 120-97 loss on Sunday. D’Angelo Russell led the team with 26 points on nine of 17 shooting, Spencer Dinwiddie added 13 points with six assists while Caris LeVert chipped in with 10 points and five assists off the bench. As a team, the Nets shot just 38 percent from the field but they actually showed plenty of fight to cut a 19-point deficit to just six, before the 76ers took over in the fourth quarter. With the loss, Brooklyn dropped to 21-46 overall and 12-22 at home.

The Raptors are simply the hottest team in the league at the moment and they need to keep winning to hold off the Eastern Conference, so it’s hard to imagine they’ll have too much trouble getting past this struggling Nets team who have nothing to play for. I just don’t see this one being close as the Raptors are just rolling at the moment and they should be able to make it nine straight with an easy double-digit win here.