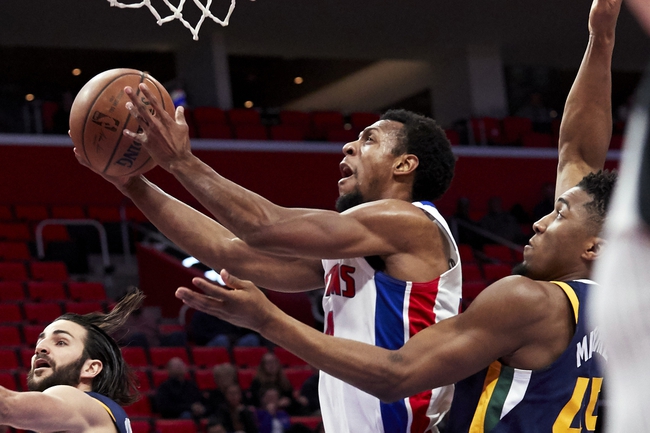 The Detroit Pistons travel to Salt Lake City to battle the Utah Jazz at the Vivint Smart Home Arena on Tuesday.

The Detroit Pistons have been in a real slump lately as they’ve lost 10 of their past 13 games but they will be feeling better after snapping a four-game skid with a 99-83 win over the Bulls on Friday. Blake Griffin led the team with 25 points, eight rebounds and eight assists, Reggie Bullock added 21 points on nine of 12 shooting while Andre Drummond chipped in with five points, 17 rebounds and four blocks. As a team, the Pistons shot 47 percent from the field and nine of 27 from the three-point line as they dominated the second half to win easily after trailing by 10 points late in the second quarter. With the win, Detroit improved to 30-36 overall and 21-14 at home.

Meanwhile, the Utah Jazz have been in great form lately as they’ve won 18 of their last 20 games and they will be aiming for a seventh straight win after making light work of the Pelicans in a 116-99 road win on Sunday. Ricky Rubio continued his strong form with 30 points, 10 rebounds and seven assists, Donovan Mitchell added 27 points, Joe Ingles chipped in with 20 while Rudy Gobert finished with a double-double of 19 points with 16 rebounds. As a team, the Jazz shot 41 percent from the field and 12 of 32 from the three-point line as they dominated the second half, especially the fourth quarter where they outscored the Pelicans by 38-25 to run away with the game despite a triple-double from Anthony Davis. With the win, Utah improved to 37-30 overall and 16-19 on the road.

The Pistons were able to pull off a comfortable win over the Bulls in their last outing, but they won’t exactly be celebrating as they would’ve felt it was long overdue. The Jazz have quietly been one of the hottest teams in the league and they’ve won and covered in each of their last four games. The Pistons have failed to cover in each of their last seven road games and I think that trend continues here as the red-hot Jazz should be able to win this one by double-digits.