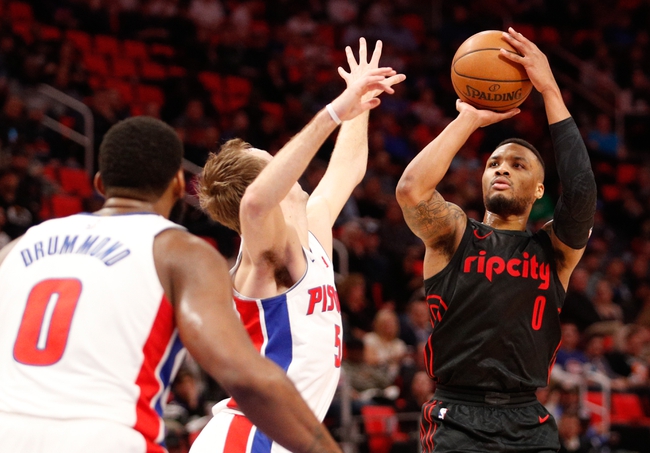 The Detroit Pistons and the Portland Trailblazers duke it out at the Moda Center on Saturday night.

The Detroit Pistons have been in a real slump as they’ve lost 12 of their last 15 games and they will be aiming to snap a two-game skid after falling to the Nuggets in a 120-113 road loss on Thursday. Blake Griffin led the team with 26 points and nine assists, Dwight Byucks added 22 points off the bench, Andre Drummond scored 21 points with 17 rebounds while Reggie Bullock chipped in with 17 points. As a team, the Pistons shot 47 percent from the field and 14 of 27 from the three-point line but it was always going to be tough for the Pistons to come back after getting outscored by 32-22 in the second quarter to trail by 16 points going into halftime. With the loss, Detroit fell to 30-38 overall which is only good for ninth place in the Eastern Conference standings.

Meanwhile, the Portland Trailblazers have been on an absolute tear lately as they’ve won 13 of their last 14 games and they will be gunning for a 12th straight win after taking down the Cavaliers in a 113-105 home win on Thursday. CJ McCollum led the team with 29 points on 12 of 24 shooting, Damian Lillard added 24 points with nine assists while Maurice Harkless chipped in with 17 points. As a team, the Trailblazers shot 44 percent from the field and 12 of 35 from the three-point line but they grabbed a total of 13 offensive rebounds to beat the Cavaliers on the boards by 50-34. With the hard-fought win, Portland improved to 42-26 overall which currently has them sitting in third place in the Western Conference standings.

The Pistons just haven’t been able to buy a win these days and they didn’t really look too competitive in their road loss at Denver on Thursday, so I don’t like their chances against this red-hot Blazers team playing their best basketball of the season. The Blazers have covered in 16 of their last 21 home games and I think that trend continues as they roll to their 12th straight win in this one.