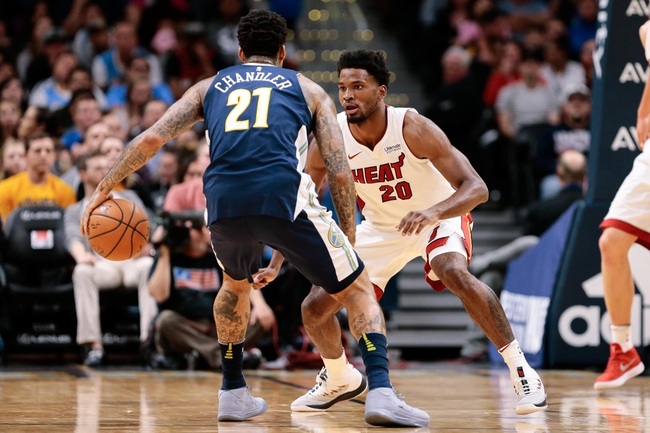 The Denver Nuggets and the Miami Heat duke it out at the American Airlines Arena on Monday night.

The Denver Nuggets have been a little hit and miss lately as they’ve won five of their last 11 games and they will be looking to bounce back after falling to the hapless Grizzlies in a 101-94 road loss on Saturday. Nikola Jokic led the team with 17 points and 12 rebounds, Jamal Murray added 16 points on five of 18 shooting while Paul Millsap chipped in with 12 points. As a team, the Nuggets shot 36 percent from the field and nine of 33 from the three-point line but they were slow out of the gates and found themselves trailing by as many as 21 points early in the second quarter before they started to fight back. To their credit, the Nuggets did manage to tie the game midway through the fourth quarter but they just couldn’t get over the line as the Grizzlies closed the game on a 13-6 run to steal the game. With the loss, Denver dropped to 38-32 overall which is currently good for 10th place in the Western standings.

Meanwhile, the Miami Heat have been building some momentum with seven wins in their last 11 outings and they will be looking to stay hot after Friday’s 92-91 road win over the Lakers. Goran Dragic led the team with 30 points on 10 of 18 shooting, Kelly Olynyk added 17 points off the bench while James Johnson chipped in with 12 points, seven rebounds and five assists. As a team, the Heat shot just 38 percent from the field and 10 of 36 from the three-point line but they forced the Lakers into 20 turnovers while holding them to just 18 points in the fourth quarter. With the win, Miami improved to 37-33 overall which is currently good for eighth place in the Eastern Conference standings.

Dwyane Wade will not suit up on Monday due to that nagging hamstring injury, while Hassan Whiteside will sit out with a hip injury. The Heat have been playing solid basketball lately and they did well to escape LA with a narrow win over the Lakers, but they have done it tough against the Nuggets in recent times as they've covered the spread in 16 of their last 23 meetings. The Nuggets continue to struggle away from home but the road team has covered in each of the last five meetings and I think that trend continues as the Nuggets pull out a tough road win in this one.