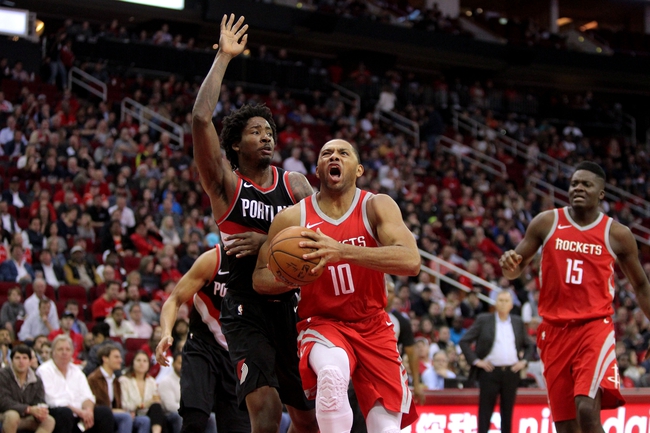 James Harden and the Houston Rockets battle Damian Lillard and the Portland Trailblazers at the Moda Center on Tuesday.

The Houston Rockets have been on fire for a long time now as they’ve won 22 of their past 23 games and they will be looking to build on their current five-game win streak after taking down the Timberwolves in a 129-120 road win on Sunday. James Harden led the team with 34 points and 12 assists, Clint Capela added 16 points with 12 rebounds while Chris Paul added 18 points with eight rebounds and nine assists. As a team, the Rockets shot a sizzling 55 percent from the field and 16 of 35 from the three-point line as they stormed out of the gates and led by as many as 25 points before the Timberwolves made their run in the fourth quarter to keep the final score respectable. With the win, Houston improved to 56-14 overall which currently has them three games clear of the second-placed Warriors in the Western Conference standings.

Meanwhile, the Portland Trailblazers have been on an absolute tear themselves as they’ve won 15 of their last 16 games and they will be gunning for a season-high 14th straight win after cruising past the Clippers in a 122-109 road win on Sunday. Damian Lillard led the team with 23 points, Maurice Harkless and CJ McCollum each scored 21 points while Jusuf Nurkic chipped in with 17 points, 12 rebounds and four blocks. As a team, the Trailblazers shot 50 percent from the field and 14 of 29 from the three-point line but they really couldn’t gain any separation from the Clippers until they went on a decisive 10-run in the third quarter. With the win, Portland improved to 44-26 overall which is currently good for third place in the Western Conference standings.

Two of the hottest teams in the league collide on Tuesday but these teams have already met twice this season with the Rockets winning on each occasion. It’s hard to split these two teams no matter which way you slice it as the Rockets are 9-2 ATS in their last 11 road games while the Trailblazers are 8-0 ATS in their last eight games against a team with a winning record. You could make an argument for either side in this one, but a win here would mean more to the Trailblazers than the Rockets, so I'm leaning towards home team to stay hot with a statement win in this one.