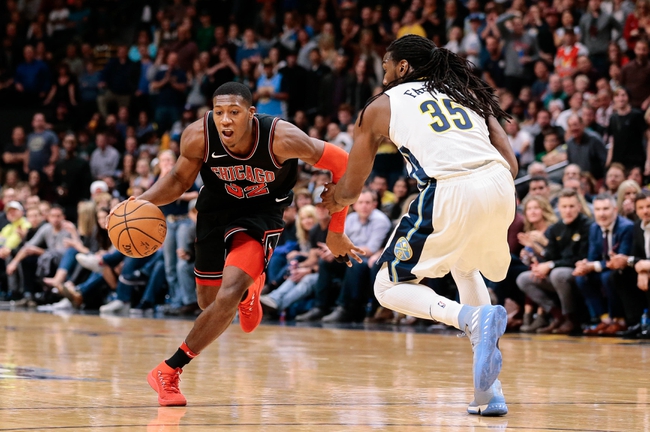 The Denver Nuggets and the Chicago Bulls duke it out at the United Center on Wednesday night.

The Denver Nuggets could really do with a win as they’ve lost five of their last eight games and they will be hoping to snap a two-game skid after falling to the Heat in a 149-141 double overtime loss on Monday. Nikola Jokic led the team with 34 points and 15 rebounds, Wilson Chandler added 26 points, Jamal Murray scored 23 points with five assists while Will Barton chipped in with 22 points. As a team, the Nuggets shot 46 percent from the field while the Heat shot 55 percent from the field, but the Nuggets did hold a 31-17 advantage in made free throws which kept them in the game until the second overtime period. With the loss, Denver dropped to 38-33 overall which is currently good for 10th place in the Western Conference standings.

Meanwhile, the Chicago Bulls have lost 10 of their last 14 games and they will be hoping to avoid a third straight loss after falling to the Knicks in a 110-92 rout on Monday. Cristiano Felicio led the team with 17 points while Bobby Portis and Antonio Blakeney each scored 16 points. As a team, the Bulls shot just 35 percent from the field and a miserable three of 30 from the three-point line as they struggled mightily against the Knicks. Cameron Payne scored just four points on two of 12 shooting, Paul Zipser shot one of eight for his seven points while Justin Holiday missed all six of his shot attempts to finish scoreless. With the loss, Chicago dropped to 24-46 overall and 9-26 on the road.

The Nuggets certainly haven’t been at their best lately, particularly on the road where they are currently on a four-game losing streak. The Bulls haven’t exactly been setting the world on fire as they’ve lost three of their last four, but two of those losses were by single digits and they lost to the Nuggets by 111-110 back on Nov 30 so this game could be a close one. With that being said, there is simply too much on the line for the Nuggets in this one as they need a win to stay in the playoff race, so I’m leaning with the Nuggets for the win and cover.