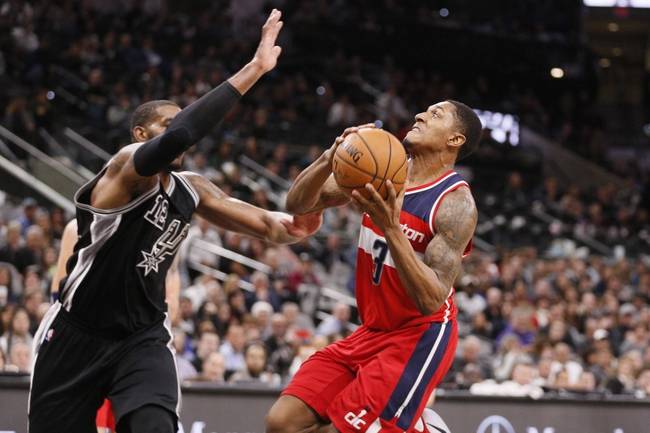 The Washington Wizards and the San Antonio Spurs duke it out at the AT&T Center on Wednesday night.

The Washington Wizards have been playing well over the last couple of weeks as they’ve won four of their last six games and they will be gunning for a third straight win after sneaking past the Pacers in a 109-102 home win on Saturday. Bradley Beal led the team with 19 points and six assists, Marcin Gortat added 18 points, Kelly Oubre Jr. provided 16 points off the bench while Markieff Morris chipped in with 15 points. As a team, the Wizards shot 54 percent from the field and 10 of 20 from the three-point line as they cruised in the second half after dominating the first half by 57-45. Tomas Satoransky continues to provide handy numbers in the starting point guard position as he scored 12 points with five rebounds and eight assists and he should be in the starting gig for at least another week as John Wall is recovering from that knee injury. With the win, Washington improved to 40-30 overall which is currently good for fifth place in the Eastern Conference standings.

Meanwhile, the San Antonio Spurs were going through a bit of a rough patch but they look to be a team back on the rise as they will be aiming for a fifth straight win after taking down the Warriors in an 89-75 home win on Monday. LaMarcus Aldridge led the team with 33 points on 13 of 22 shooting, Patty Mills added 12 points while Danny Green chipped in with 11 points. As a team, the Spurs shot just 40 percent from the field and eight of 23 from the three-point line but they took full advantage of a shorthanded Warriors team missing all their star players as they stayed close until the fourth quarter where they outscored the Warriors by 28-12 to run away with the game. With the win, San Antonio improved to 41-30 overall which is currently good for fifth place in the Western Conference standings.

The Spurs are starting to string together some wins now but they certainly didn’t look too convincing against a depleted Warriors team missing all four of their best players. The Wizards have been heating up with Beal leading the way and they will want to keep winning to capture home-court advantage in the first round of the playoffs. It’s really hard to split these two teams the way they’ve been playing, so I’m taking the Wizards with the points as I think they will come in handy in this one.