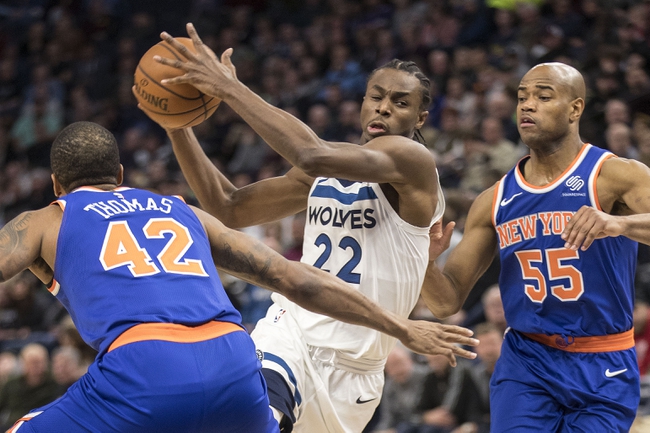 The Minnesota Timberwolves have won three of their last five games and they will be hoping to be build some momentum after blowing past the Clippers in a 123-109 home win on Tuesday. Karl-Anthony Towns led the team with 30 points on 10 of 19 shooting, Andrew Wiggins added 27 points while Jamal Crawford and Jeff Teague scored 20 points apiece. As a team, the Timberwolves shot 52 percent from the field and 10 of 25 from the three-point line as they came out hot to start the second half and outscored the Clippers by 36-25 in the third quarter to put the game to bed early. With the win, Minnesota improved to 41-31 overall which is currently good for seventh place in the Western Conference standings.

Meanwhile, the New York Knicks have lost 10 of their last 13 games but they were actually going for a third straight win before falling to the Heat in a 119-98 road loss on Wednesday. Enes Kanter led the team with 23 points and 13 rebounds, Michael Beasley added 22 points on 10 of 15 shooting while Trey Burke chipped in with 16 points. As a team, the Knicks shot 43 percent from the field and 10 of 31 from the three-point line but the game was out of reach after the Heat’s second unit took over in the second quarter where they were outscored by 37-21. With the loss, New York dropped to 26-46 overall and 8-29 on the road.

Head to head, the over is 6-2 in the last eight meetings in New York and the Timberwolves are 1-4 ATS in the last five meetings.

The Timberwolves been a little below their best lately but they looked great in their big win over the Clippers in their last outing and need to keep collecting these wins to stay in the playoff race in the congested Western Conference. Meanwhile, the Knicks haven’t been able to buy a win these days and they really don’t have much to play for at this stage of the season. The Timberwolves are just 4-13 ATS in their last 17 road games but they should be more than good enough to get the win and cover against this slumping Knicks team.