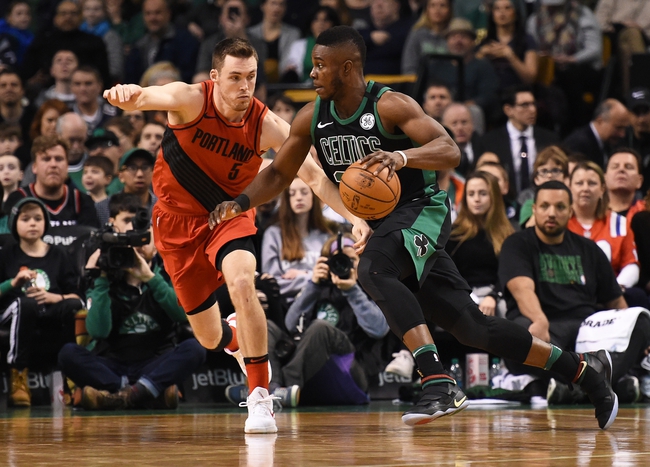 The Portland Trailblazers play host to the Boston Celtics at the Moda Center on Friday night.

The Boston Celtics have split their last eight games but they will be looking to build on Tuesday’s thrilling 100-99 win over the Thunder. Jayson Tatum led the team with 23 points, 11 rebounds and four assists, Marcus Morris added 21 points while Greg Monroe chipped in with 17 points. As a team, the Celtics shot 41 percent from the field and 13 of 36 from the three-point line as they pulled off the most unlikely of comeback victories, rallying back from a six-point deficit with just 24.7 seconds left on the clock to win the game on a clutch three from Morris. With the win, Boston improved to 48-23 overall which leaves them in second place in the Eastern Conference.

Meanwhile, the Portland Trailblazers will be looking to bounce back after having their 13-game win streak snapped by the Rockets in a 115-111 home loss on Tuesday. Al-Farouq Aminu drained six three-pointers to lead the team with 22 points, Jusuf Nurkic added 21 points with 11 rebounds and four blocks while Damian Lillard chipped in with 20 points and six assists. As a team, the Trailblazers shot 49 percent from the field and 11 of 28 from the three-point line which just wasn’t good enough against the Rockets who drained 19 of 36 from the three-point line. Lillard could never find his rhythm as he shot just five of 17 from the field and zero of seven from the three-point line. With the loss, Portland dropped to 44-27 overall which is currently good for third place in the Western Conference.

Kyrie Irving is expected to sit out the Celtics’ upcoming four-game road trip as he continues to deal with that knee injury. The Celtics have had their struggles without Irving but they will come into this game full of confidence after pulling off a miraculous comeback win in their last outing. Meanwhile, the Trailblazers have been one of the hottest teams in the league and they were aiming for a 14th straight win before the league-leading Houston halted their momentum. The Celtics have covered in 17 of the last 25 meetings against the Trailblazers and I think they do just enough to get the cover but not the win in this one.