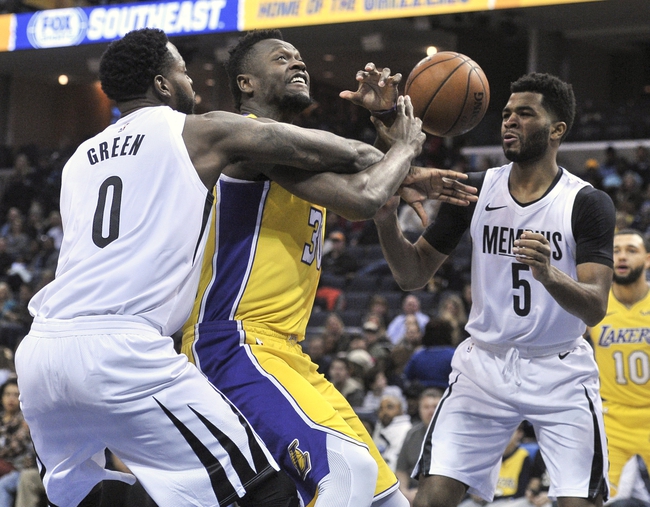 The Los Angeles Lakers travel to the FedExForum to battle the Memphis Grizzlies on Saturday night.

The Los Angeles Lakers were playing some of their best basketball of the season through a three-week stretch but they're suddenly looking to snap a four-game skid after losing at New Orleans in a 128-125 loss on Thursday. Kentavious Caldwell-Pope drained eight three-pointers to lead the team with 28 points, Brook Lopez and Julius Randle scored 23 points apiece while Kyle Kuzma chipped in with 22 points. As a team, the Lakers shot 49 percent from the field and 17 of 39 from the three-point line but they collapsed in the fourth quarter where they were outscored by 31-17. With the loss, Los Angeles dropped to 31-40 overall and 13-24 on the road.

Meanwhile, the Memphis Grizzlies could really do with a win as they've lost 22 of their last 23 games and they weren't even close to being competitive in Thursday's 140-79 loss at Charlotte. Wayne Selden led the team with 18 points off the bench, Tyreke Evans added 16 points with four assists while Jarrell Martin chipped in with 12 points but no other player finished in double figures as the Grizzlies shot just 38 percent from the field and four of 18 from the three-point line. This game really was over before halftime as the Grizzlies were already trailing by 37-14 after the first quarter and they never looked threatening. With the loss, Memphis dropped to 19-53 overall and 5-30 on the road.

The Lakers will still be kicking themselves after falling to the Pelicans despite leading by 11 points in the fourtth quarter, especially Lonzo Ball who will be looking to bounce back after shooting just one of 12 from the three-point line. The Grizzlies look to already be in holiday mode as they looked to be sleepwalking against the Hornets in their massive loss on Thursday. I think the Grizzlies will come out firing looking to make amends for Thursday's loss and the betting trends are in favor of them, but I'm leaning towards the Lakers to snap out of their funk with a solid road win over this makeshift Grizzlies roster.