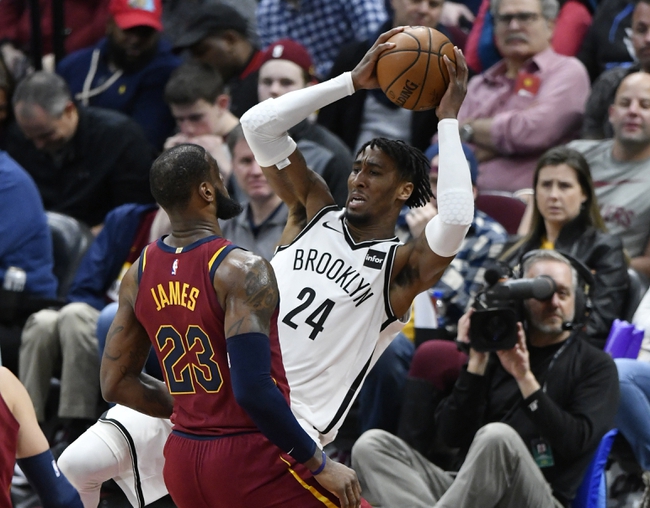 The Cleveland Cavaliers look to stay hot when they take on the Brooklyn Nets at the Barclays Center on Sunday.

The Cleveland Cavaliers have really started to heat up lately as they've won seven of their last 10 games and they will be gunning for a fifth straight win after blowing past the lowly Suns in a 120-95 home win on Friday. LeBron James led the team with 27 points, six rebounds and nine assists, Kevin Love added 20 points while Larry Nance Jr. chipped in with a double-double of 15 points with 10 rebounds. As a team, the Cavaliers shot 49 percent from the field as they traded blows with the Suns in the first quarter before taking over with a 39-18 second quarter effort which put the game to bed before halftime. WIth the win. Cleveland improved to 43-29 overall and 25-11 at home.

Meanwhile, the Brooklyn Nets have lost nine of their last 12 games and they will be hoping to avoid a third straight defeat after falling at Toronto in a 116-112 loss on Friday. Rondae Hollis-Jefferson and Allen Crabbe each scored 18 points while D'Angelo Russell racked up a triple-double of 18 points with 11 rebounds and 13 assists. As a team, the Nets shot 48 percent from the field and 11 of 27 from the three-point line as they fought hard to lead by as many as nine points early in the fourth quarter before the Raptors second unit took over to level the score, allowing the Raptors' Kyle Lowry to put the finishing touches on his own triple-double. With the loss, Brooklyn fell to 23-50 overall and 9-26 on the road.

The Cavaliers are on a bit of a roll now with four wins on the trot while the Nets have been surprisingly competitive in their losses despite having little to play for at this stage of the season. In fact, the Nets' last five games have netted two wins and three losses by single digits. With that being said, I think the Cavaliers come into town and leave with the win but I think the Nets get the cover as they rally in the fourth.