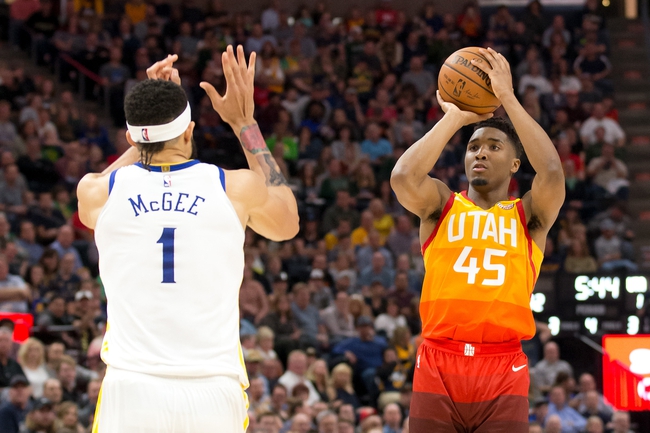 The Utah Jazz take on the shorthanded Golden State Warriors at the Oracle Arena on Sunday night.

The Utah Jazz have won 10 of their last 12 games but they will be looking to bounce back after falling to the Spurs in a 124-120 overtime loss on Friday. Donovan Mitchell led the team with 35 points on 14 of 36 shooting while nailing a clutch three to send the game into overtime. Derrick Favors added 22 points, Ricky Rubio added 20 points with nine assists while Rudy Gobert chipped in with 13 points. As a team, the Jazz shot 49 percent from the field and 11 of 28 from the three-point line as they pushed the Spurs to overtime but fell just short as the Spurs' LaMarcus Aldridge finished with a career-high 45 points. With the loss, Utah dropped to 41-32 overall which is good for eighth place in the Western Conference.

Meanwhile, the Golden State Warriors have cooled off over last couple of weeks with just three wins in their last seven games but they will be looking to build on Friday's 106-94 home win over the Hawks. Stephen Curry returned to the team to lead the way with 29 points before leaving the game early with a knee injury. Nick Young added 24 points while Quin Cook chipped in with 13 points, eight rebounds and six assists off the bench. As a team, the Warriors shot 45 percent from the field and 12 of 30 from the three-point line as they trailed by eight points at halftime before taking over the game with a dominant 36-13 third quarter effort. With the win, Golden State improved to 54-18 overall and 28-8 at home.

The Jazz have been in great form and they were so close in their overtime loss to the Spurs, so they're more than capable of taking down the Warriors who will be without Stephen Curry, Kevin Durant and Klay Thompson for this matchup. Draymond Green will surely have a big game for the Warriors but I don't think it'll be enough against this Jazz team who are 9-4 ATS in their last 13 road games.