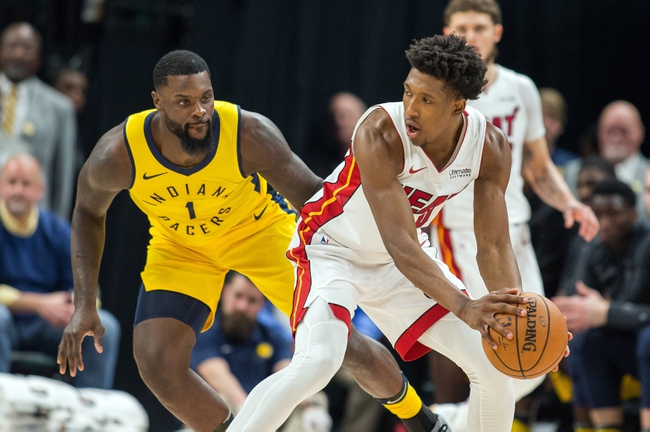 The Miami Heat have won seven of their past 11 games but they will be looking to bounce back after falling to the Thunder in a 105-99 road loss on Friday. James Johnson led the team with 23 points, Goran Dragic added 20 points with five assists while Justise Winslow and Wayne Ellington scored 14 points apiece. As a team, the Heat shot 39 percent from the field and 13 of 30 from the three-point line as they seemed to have the game in control until the fourth quarter where the Thunder's Russell Westbrook poured in 17 points. With the loss, Miami dropped to 39-34 overall and 17-21 on the road.

Meanwhile, the Indiana Pacers have won eight of their last 12 games and they will be looking to build on Friday's 109-104 home win over the Clippers. Bojan Bogdanovic led the team with 28 points on 12 of 18 shooting, Victor Oladipo added 18 points with four assists while Darren Collison chipped in with 13 points and 10 assists. As a team, the Pacers shot 46 percent from the field and 11 of 31 from the three-point line as they battled with the Clippers for three tight quarters before pulling away late with a decisive 9-0 run in the fourth. With the win, Indiana improved to 42-31 overall which is currently good for fifth place in the Eastern Conference standings.

The Heat will be kicking themselves as they were in great position to win against the Thunder before Westbrook got loose in the fourth quarter, but they've been in solid form and are 37-17-2 ATS in their last 56 road games. However, the Pacesr have been just as good over their past 12 games and they're a solid 5-2 ATS in their last seven against Heat at home. You could make an argument for either side, but I'm leaning towards the Pacers at home in in a close one.