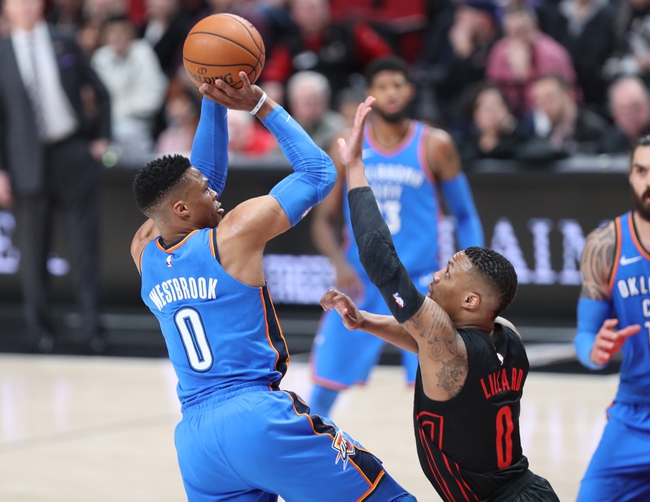 The Portland Trailblazers pay a visit to the Oklahoma City Thunder at the Chesapeake Energy Arena on Sunday night.

The Portland Trailblazers have really cooled off since their 13-game win streak as they're now hoping to avoid a third straight loss after falling to the Celtics in a 105-100 home loss on Friday. Damian Lillard steered the offense with 26 points and eight assists, CJ McCollum added 26 points on 12 of 22 shooting while Al-Farouq Aminu chipped in with 16 points, 10 rebounds and five steals. As a team, the Trailblazers shot 44 percent from the field and eight of 33 from the three-point line as they seemingly had control of the game with a 12-point lead in the third quarter until the Celtics outscored them by 38-23 in the fourth quarter to steal the game. With the loss, Portland, dropped to 44-28 overall which is currently good for third place in the Western Conference standings.

Meanwhile, the Oklahoma City Thunder have been in great form as they've won seven of their past eight games and they will be looking to stay hot after taking down the Heat in a 105-99 home win on Friday. Russell Westbrook led the team with 29 points, 13 rebounds and eight assists, Steven Adams added 24 points with 12 rebounds while Paul George shot just three of 16 for his 12 points. As a team, the Thunder shot 42 percent from the field and eight of 26 from the three-point line as they struggled to score against the Heat defense for three quarters before exploding for 41 points in the fourth quarter thanks largely to Westbrook who scored 17 in the quarter. With the win, Oklahoma City improved to 44-30 overall which is good for fourth place in the Western Conference.

These two teams look to be so evenly matched on paper but the Trailblazers are actually leading the season series by 3-0. The Thunder are probably the hotter team at the moment and they'll be confident after rallying back to stun the Heat in their last outing, but the Trailblazers are a perfect 5-0 ATS in the last five meetings and I think that trend continues as they pull off the minor upset here.