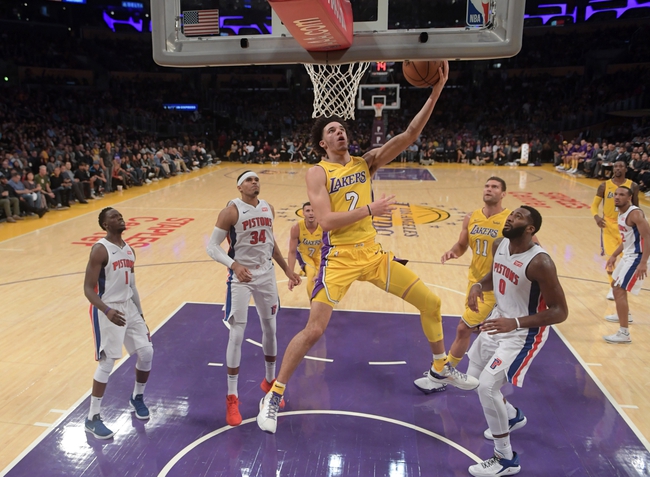 The Los Angeles Lakers and the Detroit Pistons duke it out at Little Caesars Arena on Monday night.

The Los Angeles Lakers have been in a bit of a slump lately but they were able to put an end to an ugly four-game skid with a 100-93 win at Memphis on Saturday. Kyle Kuzma led the team with 25 points and 10 rebounds, Julius Randle added 20 points with 11 rebounds, Kentavious Caldwell-Pope scored 18 points while Lonzo Ball chipped in with 12 points, eight rebounds and 10 assists. As a team, the Lakers shot just 40 percent from the field and 13 of 38 from the three-point line as they fell behind by double digits early before rallying late to steal the game on the back of an 11-2 run in the fourth quarter. With the win, Los Angeles improved to 32-40 overall and 14-24 on the road.

Meanwhile, the Detroit Pistons have made the most of an easy stretch in their schedule with three wins in their last four outings and they will be looking to stay hot after beating the Bulls by 117-95 on Saturday. Anthony Tolliver led the team with 25 points off the bench, Andre Drummond added 15 points with 20 rebounds and four assists while Reggie Jackson chipped in with 14 points. As a team, the Pistons shot 49 percent from the field and 16 of 42 from the three-point line as they dominated the Bulls right from the tipoff to lead by 19 points at halftime before going basket for basket the rest of the way. With the easy win, Detroit improved to 33-40 overall and 22-14  at home.

Isaiah Thomas has already been ruled out for the Lakers with hip soreness while Brandon Ingram is listed as doubtful. The Pistons have started to heat up with a trio of wins and they will be feeling good after destroying the hapless Bulls on Saturday. I just feel that the Lakers will find it tough with the injuries piling up, so I'm sticking with the Pistons who have covered in each of their last four home games.