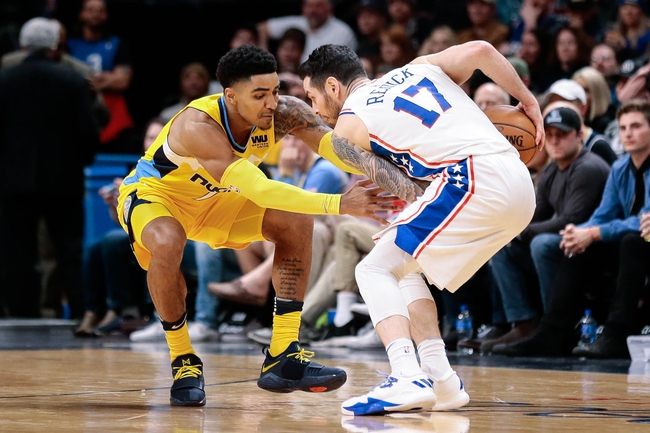 The Denver Nuggets pay a visit to the Philadelphia 76ers at the Wells Fargo Centre on Monday night.

The Denver Nuggets have been in solid form as they've won five of their last eight games and they will be aiming for a third straight win after taking down the Wizards in a 108-100 road win on Friday. Nikola Jokic and Jamal Murray each scored 25 points while Will Barton chipped in with 23 points. As a team, the Nuggets shot 43 percent from the field and 17 of 34 from the three-point line as they dominated the first half to lead by 12 points at the break, but they saw their lead cut to just one point after the Wizards rallied in the third quarter. With the win, Denver improved to 40-33 overall which is currently good for ninth place in the Western Conference standings.

Meanwhile, the Philadelphia 76ers have been in great form as they've won 10 of their last 13 games and they will be gunning for a seventh straight win after blowing past the Timberwolves in a 120-108 home win on Saturday. Joel Embiid led the team in scoring with 19 points, Dario Saric added 18 points while Ben Simmons racked up a triple-double of 15 points with 12 rebounds and 13 assists. As a team, the 76ers shot 47 percent from the field and 13 of 37 from the three-point line as they dominated the third quarter by 39-19 to lead by 27 points before resting their starters in the fourth quarter. With the win, Philadelphia improved to 42-30 which is good for fourth place in the Eastern Conference standings.

The 76ers have looked rock-solid over their six-game win streak and they're coming off a blowout win allowing plenty of rest for all of their starters. Meanwhile, the Nuggets haven't been quite as dominant but they've been building momentum and need to keep winning to stay in the race for that eighth seed in the congested Western Conference. The Nuggets have covered in just one of the last eight meetings and the 76ers are on a roll at home where they've covered in 13 of their last 16 games. I'm sticking with the 76ers to stay hot with another win and cover at home.