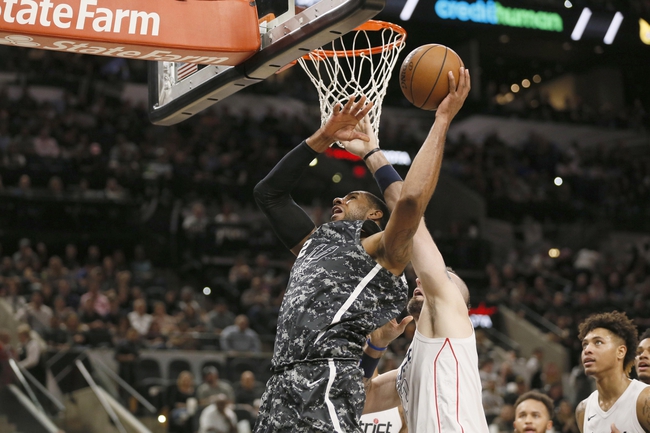 The San Antonio Spurs travel to the nation’s capital to battle the Washington Wizards at the Capital One Arena on Tuesday night.

The San Antonio Spurs were on a bit of a roll with six wins on the trot but they will be looking to bounce back after falling to the Bucks in a 106-103 road loss on Sunday. LaMarcus Aldridge led the team with 34 points, Pau Gasol added 22 points with 13 rebounds off the bench while Danny Green chipped in with 13 points. As a team, the Spurs shot 44 percent from the field and a miserable four of 17 from the three-point line as they fell just short against the Bucks despite falling behind by as many as 14 points early in the fourth quarter. With the loss, San Antonio dropped to 43-31 overall which is currently good for sixth place in the Western Conference standings.

Meanwhile, the Washington Wizards have been in a bit of a slump as they’ve lost eight of their last 12 games and they will be hoping to avoid a fourth straight loss after falling to the lowly Knicks in a 101-97 loss on Sunday. Bradley Beal struggled to find his rhythm as he scored just 14 points on five of 17 shooting while Otto Porter Jr, Markieff Morris and Kelly Oubre Jr each scored 13 points. As a team, the Wizards shot 42 percent from the field and six of 19 from the three-point line as the Wizards came out sluggishly and found themselves in a battle after the Knicks poured on 42 points in the second quarter. The Wizards’ defense was good enough to hold the Knicks to just 40 points in the second half but they simply missed too many shots they usually make and it cost them the game. With the loss, Washington dropped to 40-33 overall which is currently good for sixth place in the Eastern Conference.

The Spurs will be eager to get back on the court after having their six-game win streak snapped by the Bucks on Sunday and I like their chances against a struggling Wizards team who are coming off a poor loss to the lowly Knicks. The Spurs are 6-1 ATS in their last seven games overall while the Wizards are 1-6 ATS in their last seven games and I think those trends continue as the Spurs come away with a narrow win and cover here.