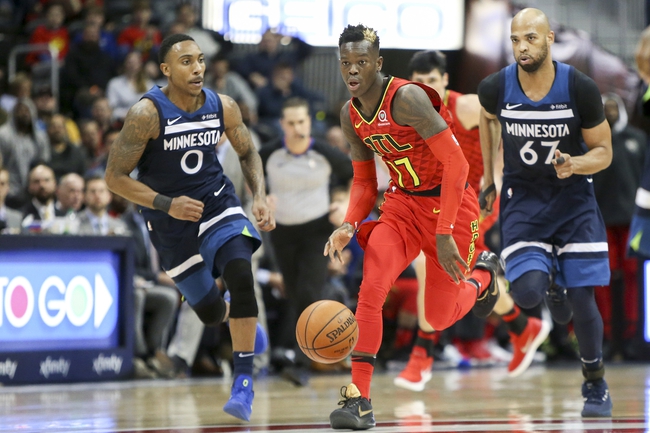 The Minnesota Timberwolves play host to the Atlanta Hawks at the Target Center on Wednesday night.

The Atlanta Hawks are just looking to play out the rest of the regular season as they’ve lost nine of their last 10 games and they will be hoping to snap a three-game skid after getting blown out by the Rockets in a 118-99 road loss on Sunday. Taurean Prince led the team with 28 points on 11 of 18 shooting, Isaiah Taylor added 26 points while Tyler Dorsey chipped in with 16 points. As a team, the Hawks shot just 44 percent from the field and 11 of 40 from the three-point line and they never threatened after falling behind by 69-45 going into the halftime break. With the loss, Atlanta dropped to 21-53 overall and 6-31 on the road.

Meanwhile, the Minnesota Timberwolves are in a bit of a slump as they’ve lost seven of their last 11 games and they will be hoping to avoid a third straight defeat after falling to the Grizzlies in a 101-93 loss on Monday. Jeff Teague led the team with 25 points and seven assists, Taj Gibson and Andrew Wiggins each scored 18 points while Karl-Anthony Towns chipped in with 15 points, 12 rebounds and six assists. As a team, the Timberwolves shot just 41 percent from the field and eight of 24 from the three-point line but they couldn’t score a single point in the final 3:40 of the game which allowed the slumping Grizzlies to pull off the upset. With the loss, Minnesota dropped to 42-33 overall which is currently good for eighth place in the Western Conference standings.

The Timberwolves haven't been anywhere near their best lately, but they need this win too much to overlook the Hawks in this one. These two teams have met just once this season and it was actually the Hawks who won by 105-100 back on Jan 29. but I can't see the Hawks winning again as they will once again be without Dennis Schroder who is nursing an ankle sprain. I'm not in love with the line, but I'm taking the Timberwolves to get the win and cover in this one.