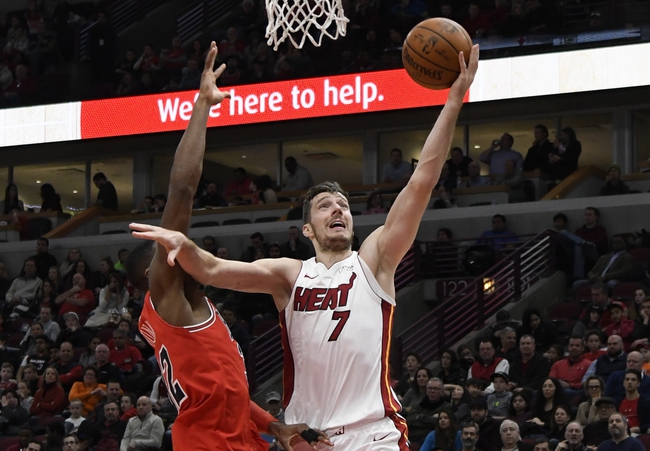 The Chicago Bulls pay a visit to the Miami Heat at the American Airlines Arena on Thursday night.

The regular season just can’t end soon enough for the Chicago Bulls who will be hoping to snap a six-game skid after falling to the Rockets in a 118-86 road loss on Tuesday. Lauri Markkanen led the team with 22 points on eight of 15 shooting while Danzel Valentine and Sean Kilpatrick each scored 12 points. As a team, the Bulls shot just 38 percent from the field and eight of 37 from the three-point line which was never going to be enough to come back against the Rockets after trailing by 60-39 going into the halftime break. With the loss, Chicago dropped to 24-50 overall and 9-28 on the road.

Meanwhile, the Miami Heat have been in solid form as they’ve won 10 of their last 16 games and they will be looking to build on Tuesday’s 98-79 home win over the red-hot Cavaliers. Kelly Olynyk led the team with 19 points on seven of nine shooting off the bench, James Johnson and Josh Richardson each scored 15 points while Dwyane Wade chipped in with 12 points and four assists in just 17 minutes off the bench. As a team, the Heat shot 47 percent from the field but they won this game with defense as they held the Cavaliers to just 36 percent shooting from the field and four of 26 shooting from beyond the arc. With the dominant win, Miami improved to 40-35 overall which is currently good for seventh place in the Eastern Conference standings.

Head to head, the under is 6-1 in the last seven meetings in Miami and the road team is 9-4 ATS in the last 13 meetings.

The Heat haven’t been playing anywhere near their best lately but they really showed up for the big game against the Cavaliers and came out with a nice win to snap a two-game skid. Meanwhile, the Bulls haven’t been able to buy a win lately as they’ve lost six straight with the last five coming by double digits. Give me the Heat to take care of business and make it six straight blowout losses for the Bulls in this one.