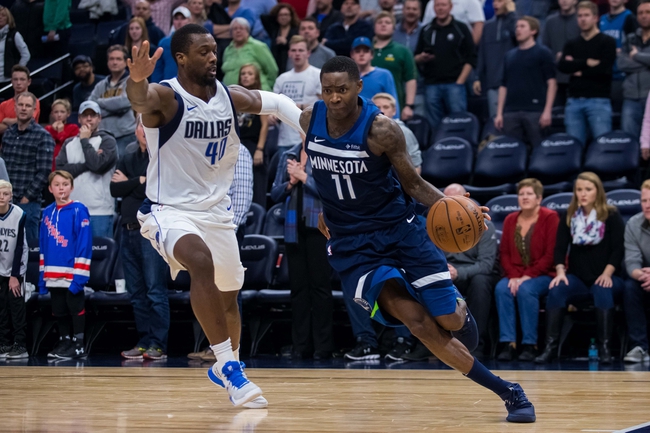 The Minnesota Timberwolves and the Dallas Mavericks duke it out at the American Airlines Center on Friday night.

The Minnesota Timberwolves haven’t been at their best lately as they’ve lost seven of their last 12 games but they were able to snap a two-game skid with a 126-114 win over the Hawks on Wednesday. Karl-Anthony Towns led the team with a franchise-record 56 points on 19 of 32 shooting to go with 15 rebounds and four assists, Andrew Wiggins added 17 points while Nemanja Bjelica chipped in with 14 points. As a team, the Timberwolves shot 53 percent from the field and 13 of 30 from the three-point line but in a game that probably should’ve been a blowout, the Timberwolves relied heavily on Towns who just couldn’t miss at times, especially from beyond the arc where he drained six of eight. With the win, Minnesota improved to 43-33 overall which is good for seventh place in the Western Conference.

Meanwhile, the Dallas Mavericks have been in a real slump as they’ve lost six of their last seven games and they will be looking to bounce back after falling to the Lakers in a 103-93 road loss on Wednesday. Harrison Barnes led the team with 17 points, Dennis Smith Jr. added 14 points with eight assists while Dirk Nowitzki chipped in with 13 points. As a team, the Mavericks shot 39 percent from the field and 13 of 44 from the three-point line as they really took it to the Lakers early on with 34 points in the first quarter, but they couldn’t buy a bucket in the fourth quarter where they were outscored by 21-12. With the loss, Dallas dropped to 23-52 overall and 9-28 on the road.

The Timberwolves will be relieved they were able to arrest a two-game slide with a win over the Hawks in their last outing, but that win was far from convincing as they really couldn’t put the Hawks away until late in the fourth quarter. Meanwhile, the Mavericks just haven’t been able to buy a win no matter who they play and you can’t help but think back to Mark Cuban’s tanking comments when you watch how they collapsed in the fourth quarter against the Lakers. The Timberwolves remain a terrible road team to bet on as they’re just 5-16 ATS in their last 21 road games, but the road team is 30-13 ATS in the last 43 meetings between these two teams and I think that trend continues.