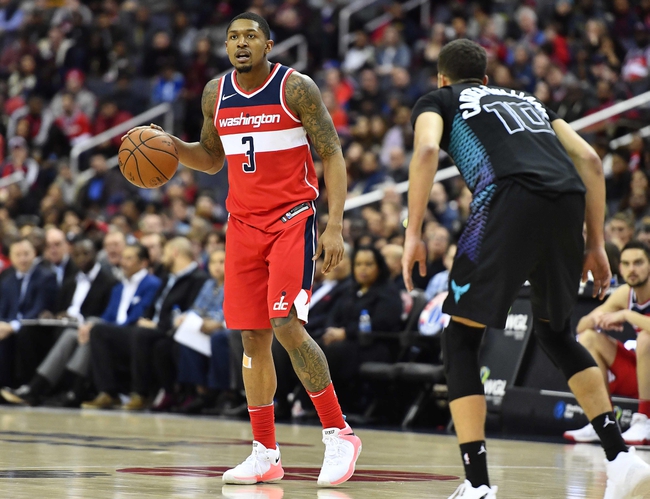 The Charlotte Hornets pay a visit to the Washington Wizards at the Capital One Arena on Saturday afternoon.

The Charlotte Hornets have been in decent form as they’ve won six of their past 10 games but they will be looking to bounce back after having their four-game win streak snapped by the Cavaliers in a 118-105 home loss on Wednesday. Kemba Walker tried his best to carry the team offensively down the stretch and finished with 21 points and four assists, Dwight Howard added 19 points with 10 rebounds while Frank Kaminsky chipped in with 16 points off the bench. As a team, the Hornets shot 51 percent from the field but just five of 21 from the three-point line but they were always backpedalling after the Cavaliers outscored them by 42-28 in the second quarter. With the loss, Charlotte fell to 34-42 overall and 21-18 at home.

Meanwhile, the Washington Wizards have been in a bit of a slump lately as they’ve lost four of their last five games and they will be hoping to bounce back after falling to the Pistons in a 103-92 road loss on Thursday. Bradley Beal led the team with 15 points but shot just six of 17 from the field including one of eight from beyond the arc. Kelly Oubre Jr. added 14 points off the bench while Markieff Morris and Tomas Satoransky each scored 11 points. As a team, the Wizards shot 41 percent from the field and a miserable six of 32 from the three-point line but the game was actually in the balance until the third quarter where the Pistons outscored the Wizards by 32-17 to take control of the game. With the loss, Washington dropped to 41-34 which is currently good for sixth place in the Eastern Conference standings.

The Wizards have been struggling for consistency lately but the good news is that there is a good chance that John Wall could make his long awaited return for the WIzards which would obviously be a major boost. The Hornets haven't been too bad lately as they've won six of their last 10 games and they will be aiming for a sweep as they lead the season series by 3-0, so an upset isn't out of the question. This could go either side and the availability of Wall plays a big role here, so I'm going to lean towards the Hornets with the points in what should be a close one.