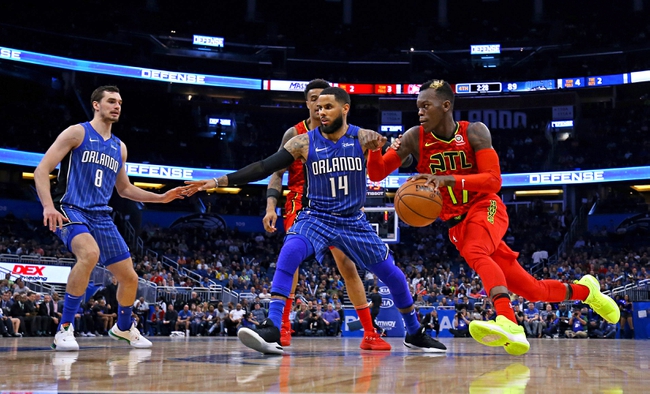 Two struggling teams collide as the Atlanta Hawks play host to the Orlando Magic at the Philips Arena on Sunday night.

The Orlando Magic have been in rough shape as they’ve lost 10 of their last 12 games and they will be hoping to snap a two-game skid after falling to the Bulls in a 90-82 loss on Friday. Aaron Gordon led the team with 18 points on six of 21 shooting, DJ Augustin added 15 points with four assists while Nikola Vucevic chipped in with 12 points and 14 rebounds. As a team, the Magic shot just 33 percent from the field and seven of 39 from the three-point line as they held the Bulls to just nine points to take the lead after trailing by 11 points at halftime, but they couldn’t keep it going as they managed just 13 points in the fourth quarter. With the loss, Orlando dropped to 22-53 overall and 15-23 at home.

Meanwhile, the Atlanta Hawks have also been struggling lately as they’ve lost 11 of their last 12 games and they will be aiming to snap a five-game skid after falling to the 76ers in a 101-91 loss on Friday. Damion Lee led the team with 20 points, Isaiah Taylor and Taurean Prince each scored 12 points while Dewayne Dedmon chipped in with 11 points and 15 rebounds. As a team, the Hawks shot just 35 percent from the field and nine of 39 from the three-point line but they just had no chance against the 76ers who dominated the third quarter by 39-18 to put the game out of reach early. With the loss, Atlanta dropped to 21-55 overall and 15-23 at home.

Head to head, the under is 40-17 in the last 57 meetings overall and the home team is 4-1 ATS in the last five meetings.

You really couldn’t bet your money with confidence on either team the way they’ve been playing lately but the Magic are 11-4 ATS in their last 15 road games while the Hawks are 0-5 ATS in their last five home games. This is a game I’d rather steer clear of, but if I had to choose I’d lean towards the Magic with the points in this one.