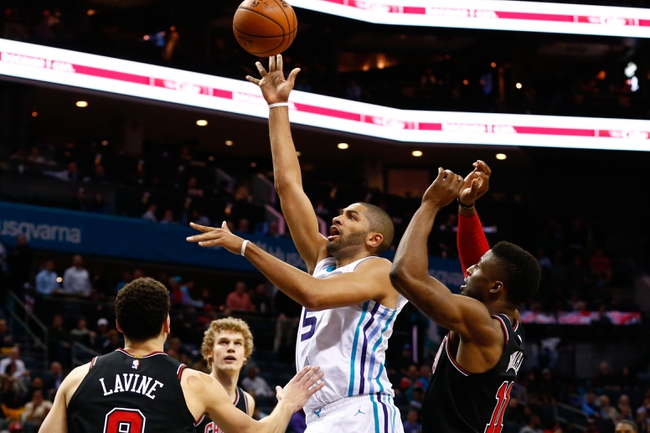 The Charlotte Hornets pay a visit to the United Center to take on the Chicago Bulls on Tuesday night.

The Charlotte Hornets will be hoping to end their season on a high note but they’ve split their last 12 games and will be hoping to snap a three-game skid after falling to the 76ers in a 119-102 loss on Sunday. Michael Kidd-Gilchrist led the team with 16 points each, Willie Hernangomez added 15 points with 11 rebounds while Kemba Walker and Dwight Howard each scored 10 points. As a team, the Hornets shot just 40 percent from the field but they couldn’t contain the shorthanded 76ers who racked up 36 assists while shooting 51 percent from the field. With the loss, Charlotte dropped to 34-44 overall and 21-19 at home.

Meanwhile, the Chicago Bulls really don’t have anything to play for at this late stage of the season but they’re suddenly aiming for a third straight win after getting blown out by the Wizards in a 113-94 win on Sunday. Lauri Markkanen led the team with 23 points on seven of 11 shooting, Bobby Portis added 18 points while Sean Kilpatrick chipped in with 14 points. As a team, the Bulls shot a healthy 52 percent from the field and 18 of 34 from the three-point line as they set the tone with 36 points in the first quarter before blowing out the score in the second half where they held the Wizards to just 35 points. With the win, Chicago improved to 26-51 overall and 16-22 at home.

These two teams have met three times this season and it’s the Bulls who won the first two meetings before the Hornets pegged one back with a 118-103 win on Feb 27. The Hornets have opened as slight road favorites but the Bulls have found a bit of a life with a couple of wins on the trot. The home team is 5-2 ATS in the last seven meetings and the Bulls are 4-1 ATS in the last five meetings overall so I’m leaning towards the Bulls and the points in this one.