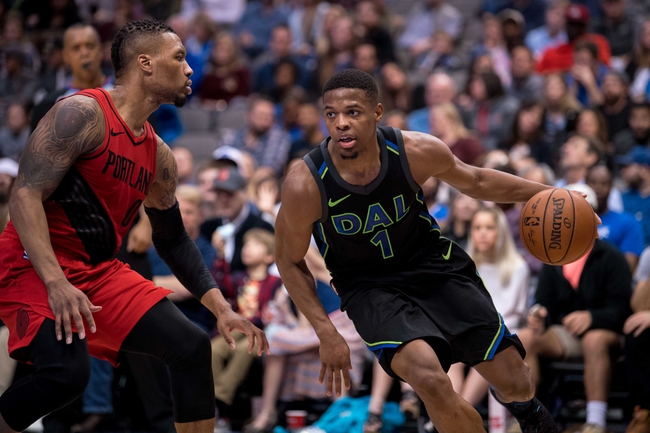 The Portland Trailblazers look to stay hot when they take on the Dallas Mavericks at the American Airlines Center on Tuesday night.

The Portland Trailblazers have been on a tear lately as they’ve won 17 of their last 20 games and they will be aiming for a third straight win after cruising past the Grizzlies in a 113-98 home win on Sunday. Damian Lillard led the team with 27 points and nine assists, CJ McCollum added 20 points and nine assists while Al-Farouq Aminu and Evan Turner each scored 17 points. As a team, the Trailblazers shot 46 percent from the field and 12 of 38 from the three-point line but they did most of their damage in the third quarter where they outscored the Grizzlies by 43-24 to lead by 23 points entering the fourth quarter. With the win, Portland improved to 48-29 overall which is still good for third place in the Western Conference standings.

Meanwhile, the Dallas Mavericks have been in a major slump lately as they’ve lost eight of their last nine games but they will be hoping to snap a three-game skid after falling to the Cavaliers in a 98-87 road loss on Sunday. Harrison Barnes led the team with 30 points and five assists while Dennis Smith Jr. chipped in with 14 points and six assists but no other players finished in double figures. As a team, the Mavericks shot just 40 percent from the field and 13 of 37 from the three-point line but they were actually right in the contest until the fourth quarter where the Cavaliers outscored them by 25-10 to run away with the game. With the loss, Dallas dropped to 23-54 overall and 9-29 on the road.

The Trailblazers have quietly been one of the hottest teams lately and they will like their chances against the Mavericks who they’ve already beaten twice this season. However, the Mavericks are 14-6 ATS in the last 20 meetings against the Trailblazers and 10-1 ATS in their last 11 games following a loss of more than 10 points. I’m a little surprised the line has opened with the Trailblazers favored by just five points, but I’m not going to miss out by overthinking it. Give me Portland to stay hot with another win and cover in this one.