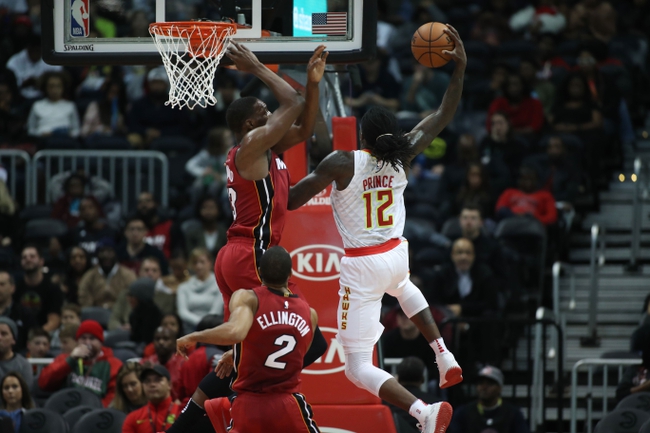 The Miami Heat and the Atlanta Hawks play the first game of a home and home set at the American Airlines Arena on Tuesday night.

The Atlanta Hawks have been in a real slump as they’ve lost 11 of their past 13 games but they will be feeling pretty good after snapping a five-game skid with a 94-88 home win on Sunday. Tyler Dorsey led the team with 19 points on eight of 11 shooting, Dewayne Dedmon added 17 points with 10 rebounds and three assists while Mike Muscala chipped in with 13 points, 10 rebounds and three assists. As a team, the Hawks shot 48 percent from the field and 11 of 36 from the three-point line as they escaped with the narrow win after leading by 13 points at halftime. With the win, Atlanta improved to 22-55 overall and 16-23 at home.

Meanwhile, the Miami Heat have been searching for a bit of consistency as they’ve won five of their last eight games but they will be hoping to bounce back after falling to the lowly Nets in a 110-109 overtime loss on Saturday. James Johnson and Goran Dragic led the team in scoring with 18 points each, Kelly Olynyk added 16 points while Hassan Whiteside chipped in with 14 points. As a team, the Heat shot 45 percent from the field and seven of 17 from the three-point line but it still wasn’t enough to get past the small-ball Nets who had seven players finish in double figures in scoring. With the loss, Miami dropped to 41-36 overall which is currently good for seventh place in the Eastern Conference.

These two squads have met twice this season with the Hawks actually winning the most recent encounter, a 110-104 back on Dec 18. The Heat haven’t been playing at their best lately but they will be kicking themselves after losing to the lowly Nets in their last outing and they won’t want to miss out on a win here as a loss has them dropping to eighth place in the Eastern standings. The Heat are 7-1-1 ATS in the last nine meetings and I expect that trend to continue here.