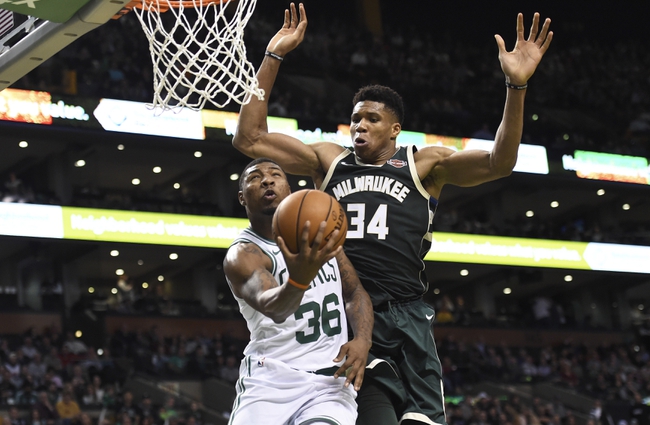 The Milwaukee Bucks play host to the Boston Celtics at the Bradley Center on Tuesday night.

The Boston Celtics have been on fire lately as they’ve won seven of their last eight games and they will be gunning for a seventh straight win after taking down the Conference-leading Raptors in a 110-99 home win on Saturday. Marcus Morris led the team with 25 points and was clutch for the Celtics down the stretch, Jayson Tatum added 24 points with four assists while Terry Rozier chipped in with 21 points and seven assists. As a team, the Celtics shot 45 percent from the field and seven of 17 from the three-point line but the game was actually tied midway through the fourth quarter until the Celtics closed the final 5:05 with a game-winning 16-5 run. With the big win, Boston improved to 53-23 overall which is still good for second place in the Eastern Conference standings.

Meanwhile, the Milwaukee Bucks have been in decent form as they’ve won four of their last six games but they will be looking to bounce back after falling to the Nuggets in a 128-125 overtime road loss on Sunday. Jabari Parker led the team with 35 points and 10 rebounds off the bench, Eric Bledsoe added 31 points and six assists while Giannis Antetokounmpo racked up 18 points, 12 rebounds and six assists. As a team, the Bucks shot 45 percent from the field and 12 of 33 from the three-point line as they seemingly had the game in control after leading by 18 points midway through the fourth quarter, but they just managed just six points in the final 5:29 of regulation as the Nuggets ran them down. With the loss, Milwaukee dropped to 41-36 overall which is currently good for eighth place in the Eastern Conference standings.

The Celtics continue to deal with injuries on a nightly basis but that hasn’t slowed them down too much and they will be pretty confident coming into this game as they beat the Bucks the last two times they met to lead the series by 2-1.The Bucks have been playing well lately but they are just 5-11 ATS in their last 16 games against a team with a winning record and just 1-6 ATS in their last seven home games against the Celtics. You could make an argument for either team here, but I’m leaning towards the Celtics to stay hot with a road win here.