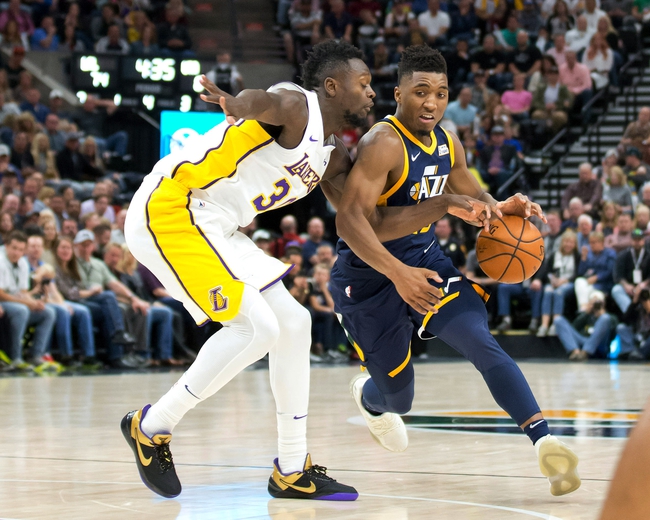 The Los Angeles Lakers travel to Salt Lake City to battle the Utah Jazz at the Vivint Smart Home Arena on Tuesday.

The Los Angeles Lakers have hit a real speed bump as they’ve lost seven of their last nine games and they will be hoping to avoid a third straight defeat after falling to the Kings in an 84-83 loss on Sunday. Julius Randle led the team with 19 points, Kentavious Caldwell-Pope added 16 points while Kyle Kuzma chipped in with 13 points. As a team, the Lakers shot just 40 percent from the field while holding the Kings to just 38 percent shooting, but the Lakers’ bench was outscored by the Kings’ bench by 37-19. Isaiah Thomas missed the game with that hip injury while Lonzo Ball sat out with a left knee contusion. With the loss, Los Angeles dropped to 33-43 overall and 19-18 at home.

Meanwhile, the Utah Jazz have been in great form as they’ve won 13 of their last 16 games and they will be aiming for a third straight win after blowing past the Timberwolves in a 121-97 road win on Sunday. Ricky Rubio drained a season-high five 3-pointers to lead the team with 23 points, Donovan Mitchell added 21 points with four assists while Derrick Favors chipped in with 16 points. As a team, the Jazz shot a sizzling 60 percent from the field and 11 of 28 from the three-point line as they never looked threatened after taking the lead in the first quarter. With the win, Utah improved to 44-33 overall and 19-20 on the road.

The Lakers were playing some of their best basketball of the season before the injuries started to take their toll on the team’s depth. Meanwhile, the Jazz have been one of the hottest teams in the league and they’ve already beaten the Lakers in the team’s lone meeting this season. This seems like a lot of points to be giving these young Lakers, but the Jazz are in a groove and should be too tough to handle at home.