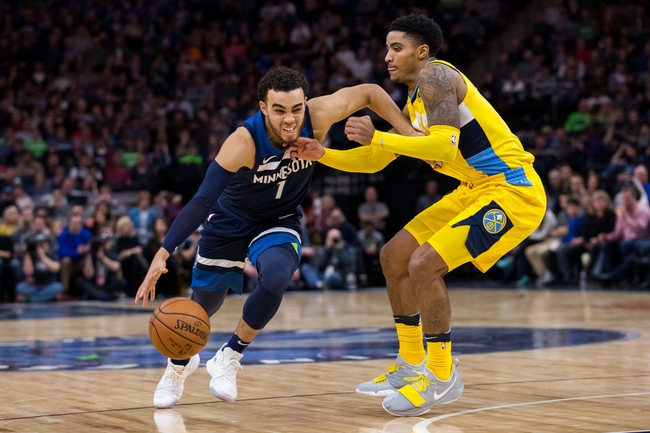 The Minnesota Timberwolves and the Denver Nuggets duke it out at the Pepsi Center on Thursday night.

The Minnesota Timberwolves could really do with a win as they’ve lost eight of their last 14 games and they will be hoping to bounce back after falling to the Jazz in a 121-97 home loss on Sunday. Andrew Wiggins led the team with 23 points and four assists, Karl-Anthony Towns added 20 points while Tyus Jones chipped in with 15 points and four assists. As a team, the Timberwolves shot 42 percent from the field and eight of 24 from the three-point line but they were terrible on the defensive end as they allowed the Jazz to shoot a season-high 60 percent from the field. With the loss, Minnesota dropped to 44-34 overall which is currently good for seventh place in the Western Conference standings.

Meanwhile, the Denver Nuggets have been in great form as they’ve won five of their last seven games and they will be gunning for a fourth straight win after sneaking past the Pacers in a 107-104 home win on Tuesday. Nikola Jokic led the team with 30 points and seven assists, Will Barton added 26 points with 10 rebounds and five assists while Jamal Murray chipped in with 12 points and seven assists. As a team, the Nuggets shot 46 percent from the field and 10 of 32 from the three-point line but they really didn’t make it easy for themselves as they were actually leading by 11 points in the final minute of the game, until the Pacers made a late run. With the important win, Denver improved to 43-35 overall which leaves them in ninth place in the Western Conference standings.

These two teams have met twice this season with the Timberwolves winning each game by single digits, but there’s much more on the line in this meeting as a win for the Nuggets would see them sneak into the playoff picture with just three regular season games following this one. This should be another close game, but the Timberwolves are just 5-17 ATS n their last 22 road games so I’m going with the Nuggets to secure this important win at home.