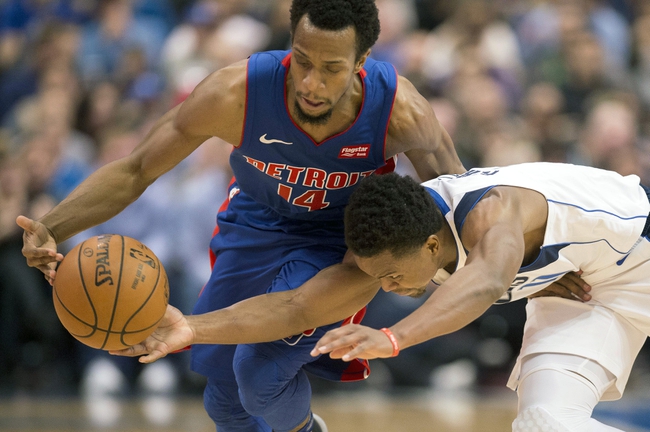 The Dallas Mavericks and the Detroit Pistons duke it out at Little Caesars Arena on Friday night.

The Dallas Mavericks have been in a major slump as they’ve lost nine of their last 11 games and they will be hoping to bounce back after falling to the Magic in a 105-100 road loss on Wednesday. Jalen Jones led the team with 16 points off the bench, Johnathan Motley and Dorian Finney-Smith added 14 points each while Kyle Collinsworth chipped in with 13 points, nine rebounds and six assists off the bench. As a team, the Mavericks shot 43 percent from the field and 10 of 30 from the three-point line, but with seven players out with injuries including Dirk Nowitzki who is out for the rest of the season, the Mavericks just didn’t have enough to keep up with the Magic. With the loss, Dallas dropped to 24-55 overall and 9-30 on the road.

Meanwhile, the Detroit Pistons have been in great form lately as they’ve won seven of their past nine games but they will be hoping to bounce back after having their five-game win streak snapped by the 76ers in a 115-108 loss on Wednesday. Anthony Tolliver drained seven 3-pointers to lead the team with 25 points, Stanley Johnson added 19 points with four assists while Andre Drummond chipped in with 13 points and 15 rebounds. As a team, the Pistons shot 44 percent from the field and 16 of 36 from the three-point line but they were slow out of the gates and found themselves with too much ground to make up after falling behind by 16 points going into halftime. With the loss, Detroit fell to 37-41 overall and 24-15 at home.

Head to head, the under is 5-1 in the last six meetings and the road team is 6-2 ATS in the last eight meetings.

The Pistons have been on a roll lately, especially against the lesser teams in the league as they are 7-0 ATS in their last seven games against a team with a losing record. The Mavericks haven't been able to buy a win lately and they have so many injuries you can't help but feel sorry for them. The Pistons are 6-1 ATS in their last seven home games and I think that trend continues as they win this one comfortably.