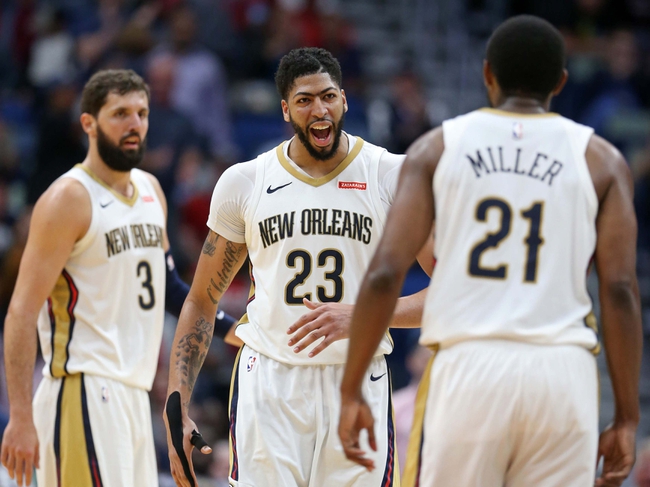 The New Orleans Pelicans and the Phoenix Suns do battle at the Talking Stick Resort Arena on Friday night.

The New Orleans Pelicans have split their last 12 games but they will be feeling relieved after putting a halt to a four-game skid with a 123-95 win over the slumping Grizzlies on Wednesday. E’Twaun Moore drained seven 3-pointers to lead the team with 30 points on 11 of 16 shooting, Anthony Davis returned to form with 28 points, 12 rebounds and three blocks while Nikola Mirotic added 25 points on 10 of 12 shooting. As a team, the Pelicans shot a healthy 52 percent from the field and 16 of 36 from the three-point line as they jumped all over the shorthanded Grizzlies to lead by 12 points at halftime before putting the game out of reach with a 32-20 third quarter effort. With the easy win, New Orleans improved to 44-34 overall which is currently good for eighth place in the Western Conference standings.

Meanwhile, the Phoenix Suns have been in a serious slump as they’ve lost 25 of their last 27 games but they will be feeling pretty good after snapping a franchise-worst 15-game skid with a 97-94 win over the Kings on Tuesday. Josh Jackson led the team with 28 points on 10 of 23 shooting, Alex Len added 17 points with 15 rebounds while Tyler Ulis chipped in with 13 points and nine assists. As a team, the Suns shot 45 percent from the field and six of 17 from the three-point line as they escaped with the narrow win after leading by as many as 12 points in the fourth quarter. With the win, Phoenix improved to 20-59 overall and 10-29 at home.

The Pelicans have been a little hit and miss lately but they will come into this game confident after destroying the Grizzlies by 28 points in their last outing. The Suns haven’t been able to buy a win until Tuesday where they just scraped by the lowly Kings. The Pelicans have already beaten the Suns twice this season and are 4-1 ATS in the last five meetings, so with so much on the line in terms of playoff seedings, I expect the Pelicans to take care of business here.