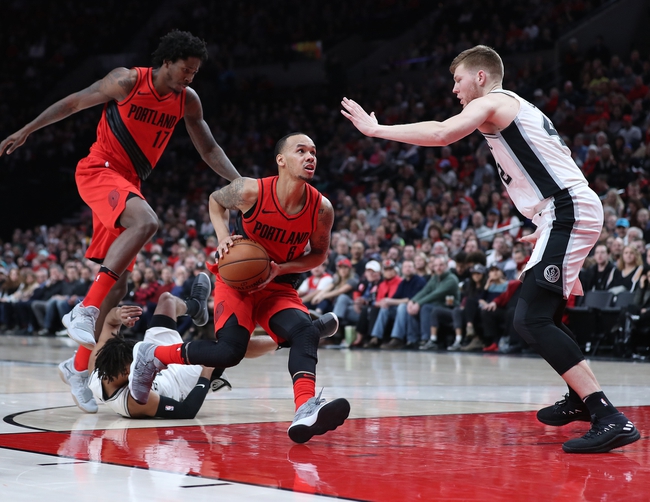 The Portland Trailblazers and the San Antonio Spurs do battle at the AT&T Center on Saturday night.

The Portland Trailblazers have cooled off since their 13-game win streak as they’ve lost five of their last nine games and they will be hoping to avoid a third straight defeat after falling to the Rockets in a 96-94 road loss on Thursday. CJ McCollum led the team with 16 points, Jusuf Nurkic added 14 points with 11 rebounds while Evan Turner chipped in with 10 points and three assists. As a team, the Trailblazers shot 45 percent from the field and seven of 22 from the three-point line as they fought hard to rally back from an early 24-point deficit only to fall just short as the Rockets’ Chris Paul hit a clutch layup with just 0.8 seconds on the clock to steal the game. Damian Lillard sat out the game with for precautionary reasons as he is dealing with an ankle injury but he is expected to return on Saturday. With the loss, Portland dropped to 48-31 overall which is good for third place in the Western Conference.

Meanwhile, the San Antonio Spurs could really do with a win as they’ve lost four of their last six games and they will be hoping to avoid a third straight defeat after falling to the Lakers by 122-112 in overtime on Wednesday. LaMarcus Aldridge led the team with 28 points, nine rebounds and four assists, Dejounte Murray added 23 points with 10 rebounds and six assists while Patty Mills chipped in with 15 points. As a team, the Spurs shot 43 percent from the field and nine of 23 from the three-point line but they couldn’t find their offense in the overtime period where they managed just four points. With the loss, San Antonio dropped to 45-34 overall which is currently good for fifth place in the Western Conference standings.

Lillard is expected to return for this game which is obviously a major boost for the Trailblazers looking to secure the third seed. The Spurs haven’t been playing near their usual standards and they will be kicking themselves after faling to the Lakers in overtime, but they are 8-0 ATS in their last eight home games overall and 7-3 ATS in their last 10 home games against the Trailblazers. I think those trends continue in this one as the Spurs come out on top in a close one.