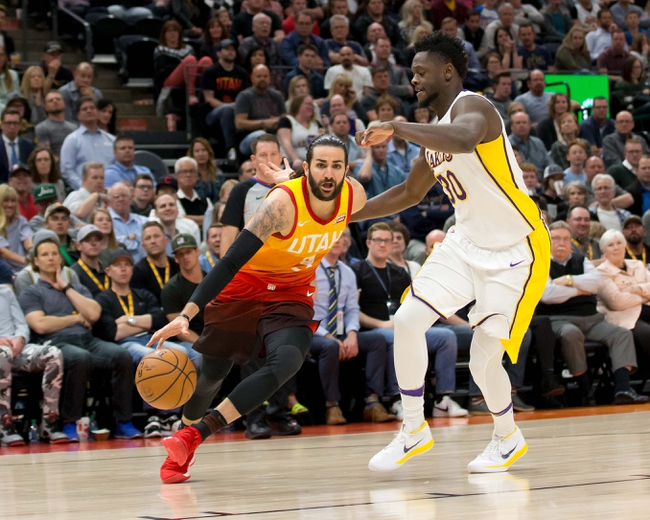 The Utah Jazz pay a visit to the Los Angeles Lakers at the STAPLES Center on Sunday night.

The Utah Jazz have been in sizzling form as they have won 15 of their last 18 games and they will be gunning for a fifth straight win after blowing past the Clippers in a 117-95 home win on Thursday. Donovan Mitchell led the way with 19 points and five assists, Derrick Favors added 16 points while Rudy Gobert chipped in with 15 points and 10 rebounds. As a team, the Jazz shot 53 percent from the field as they set the tone with 65 points in the first half before pulling away in the third quarter where they outscored the Clippers by 29-18 to lead by 27 points going into the fourth quarter. With the easy win, Utah improved to 46-33 overall and 27-13 at home which is good for fourth place in the Western Conference.

Meanwhile, the Los Angeles Lakers have really hit a rough patch as they’ve lost nine of their last 12 games and they will be hoping to bounce back after falling to the Timberwolves in a 113-96 loss on Friday. Julius Randle and Josh Hart each scored 20 points, Brook Lopez added 18 points while Ivica Zubac chipped in with 14 points but no other player scored more than eight points. As a team, the Lakers shot just 39 percent from the field as they took a seven-point lead going into halftime before getting outscored by 62-38 in the second half. With the loss, Los Angeles dropped to 34-45 overall and 20-19 at home.

The Utah Jazz are still playing for playoff seeding and will take this game seriously, but the Los Angeles Lakers have been a valuable team to back at home in the second half. The Lakers have not only covered 13 of their last 19 home games, but six of their last seven home games overall have resulted in an outright win or a loss by one bucket. This just seems like too many points to lay, especially when the Jazz have just a 0.8 point differential on the road this season.