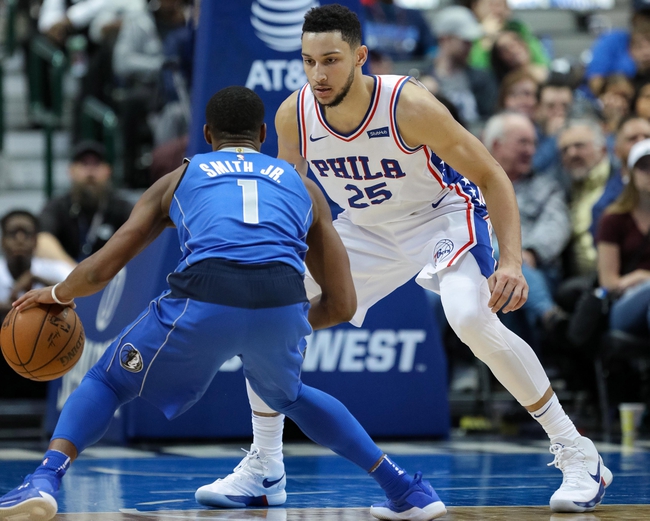 The Dallas Mavericks pay a visit to the red-hot Philadelphia 76ers at the Wells Fargo Center on Sunday afternoon.

The Dallas Mavericks have been in a major slump as they’ve lost 10 of their last 12 games and they will be hoping to avoid a third straight defeat after falling to the Pistons in a 113-106 overtime loss on Friday. Jonathan Motley led the team in scoring with 26 points and 12 rebounds, Harrison Barnes added 17 points while Dorian Finney-Smith chipped in with 15 points, 10 rebounds and four assists. As a team, the Mavericks shot 43 percent from the field and 13 of 39 from the three-point line as they drained a clutch three with 11.3 seconds left in regulation to force overtime where they managed just five points. With the loss, Dallas dropped to 24-56 overall and 9-31 on the road.

Meanwhile, the Philadelphia 76ers have been on a tear lately as they’ve now reeled off 13 straight wins after sneaking past the Cavaliers in a 132-130 home win on Friday. JJ Redick led the team in scoring with 28 points, Ben Simmons racked up a triple-double of 27 points with 15 rebounds, 13 assists and four steals while Marco Belinelli chipped in with 23 points off the bench. As a team, the 76ers shot 49 percent from the field and 14 of 39 from the three-point line as they dominated the first half to lead by 23 points going into the break before the Cavaliers stormed back in the second half. It was certainly a nervy finish for the 76ers who improve to 49-30 overall which is good for third place in the Eastern Conference.

These two teams have met just once this season and it was the 76ers who won by 112-110 back on Oct 28 but so much has changed since then as the Mavericks have fallen from grace while the 76ers have become one of the best in the Eastern Conference. The Mavericks are 0-4 ATS in the last four meetings in Philadelphia and I think that trend continues as the 76ers stay hot with a double-digit win here.