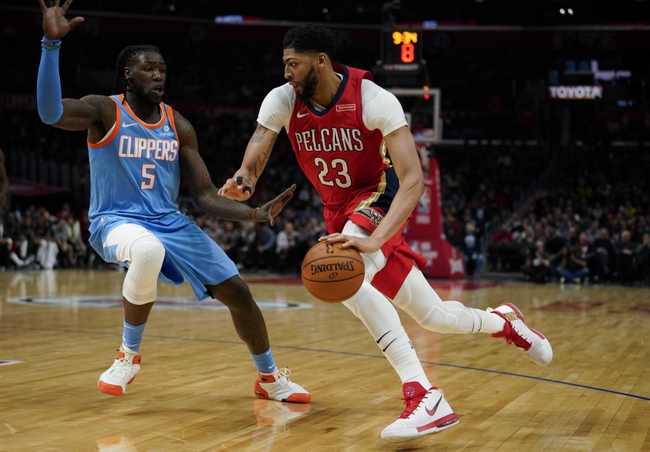 The New Orleans Pelicans travel to the STAPLES Center to battle the Los Angeles Clippers on Monday night.

The New Orleans Pelicans are jostling for playoff position and they’ve been headed in the right direction as they’ve now won three in a row following their 126-120 win at Golden State on Saturday. Anthony Davis led the team with 34 points, 12 rebounds, four assists and four blocks, Nikola Mirotic drained six 3-pointers en route to 28 points, Rajon Rondo had 12 points with 17 assists while Jrue Holiday chipped in with 25 points and six assists. As a team, the Pelicans shot 56 percent from the field and 11 of 27 from the three-point line as they set the tone with 40 points in the first quarter before escaping with the narrow win with 38 points in the fourth quarter. With the win, New Orleans improved to 46-34 overall which is good for fifth place in the Western Conference standings.

Meanwhile, the Los Angeles Clippers have been in a bit of a slump as they’ve lost four of their last five games and they will be hoping to avoid a third straight defeat after falling to the Nuggets in a 134-115 rout on Saturday. Lou Williams led the team in scoring with 24 points and five assists off the bench, Tyrone Wallace added 18 points while DeAndre Jordan and Tobias Harris each scored 16 points. As a team, the Clippers shot 49 percent from the field and just six of 17 from the three-point line which just wasn’t enough to keep up with the red-hot Nuggets who shot a sizzling 62 percent from the field. With the loss, Los Angeles dropped to 42-38 overall and 22-17 at home.

Head to head, the over is 5-1 in the last six meetings in Los Angeles and the Pelicans are 27-13 ATS in the last 40 meetings.

The Pelicans have been a little inconsistent overall lately but they will certainly be happy with themselves after beating the shorthanded Warriors in their last outing. The Clippers really don’t have much to play for now that they’re out of playoff contention and they’ve lost their last two games by big margins. The Pelicans are 27-13 ATS in the last 40 meetings and I think that trend continues as the Pelicans win this one easily.