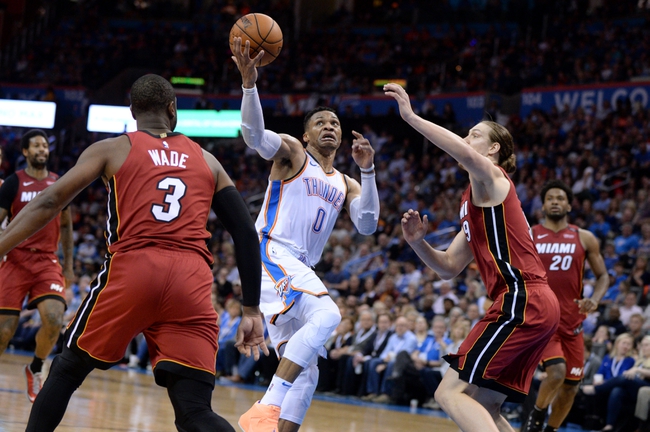 The Oklahoma City Thunder travel to the American Airlines Arena to battle the Miami Heat on Monday night.

The Oklahoma City Thunder have been in a bit of a slump as they’ve lost four of their last six games but they will be looking to build on Saturday’s 108-102 upset win at Houston. Russell Westbrook led the way with 24 points, seven rebounds and 10 assists, Paul George also scored 24 points but shot just six of 17 from the field while Carmelo Anthony chipped in with 22 points. As a team, the Thunder shot just 39 percent from the field and 10 of 33 from the three-point line but this was a closely fought game up until late in the third quarter where the Thunder went on a nice 30-15 run to pull away from the red-hot Rockets. With the win, Oklahoma City improved to 46-34 which is good for seventh place in the Western Conference standings.

Meanwhile, the Miami Heat have been in nice form lately with four wins in their last six games but they will be looking to bounce back after getting routed by the lowly Knicks in a 122-98 road loss on Friday. Goran Dragic led the team with 15 points, Hassan Whiteside added 14 points while James Johnson chipped in with 12 points and four assists. As a team, the Heat shot 39 percent from the field and seven of 27 from the three-point line but they never really looked threatening after falling behind by double-digits in the first quarter as the Knicks kept them at bay shooting 18 of 37 from the three-point line. With the win, Miami improved to 43-37 overall which is good for sixth place in the Eastern Conference.

The Heat really need this win to avoid falling to eighth place in the Eastern standings and they will be absolutely kicking themselves after they failed to show up against the lottery-bound Knicks. The Thunder are in the same boat as a loss could see them drop to eight place, but a win could be as good as fifth fourth place so they’ll come ready for this game. The early money is headed towards the Thunder in this one, but with so much at stake in terms of playoff seedings, I’m expecting a bit of defense in this one so I’m going with the under which is 8-0 in the last eight meetings.