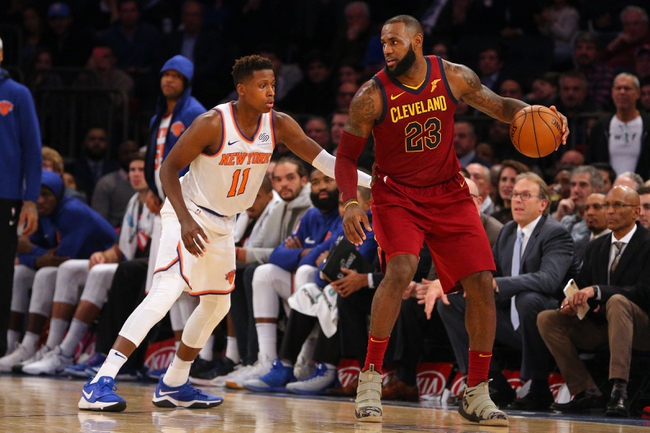 The Cleveland Cavaliers and the New York Knicks duke it out at Madison Square Garden on Monday night.

The Cleveland Cavaliers have been in great form as they’ve won 11 of their last 14 games but they will be looking to bounce back after having their five-game win streak snapped by the 76ers in a 132-130 loss on Friday. LeBron James led the way with a monster triple-double of 44 points with 11 rebounds and 11 assists, Jeff Green added 33 points while Kevin Love chipped in with 17 points, nine rebounds and four assists. As a team, the Cavaliers shot 51 percent from the field and 16 of 34 from the three-point line but they fell just short after trailing by as many as 30 points with James missing on the potential game-tying free throws. With the loss, Cleveland fell to 49-31 overall which drops them to fourth place in the Eastern Conference standings.

Meanwhile, the New York Knicks have been in a real slump as they have lost five of their last six games and they will be hoping to bounce back after falling to the Bucks in a 115-102 loss on Saturday. Jarrett Jack led the team in scoring with 18 points and seven assists off the bench, Kyle O’Quinn added 15 points with 16 rebounds and five assists while Courtney Lee chipped in with 14 points. As a team, the Knicks shot 44 percent from the field and nine of 21 from the three-point line as they played well in the first half to keep the game close before the Bucks poured in 35 points in the fourth quarter to run away with the game. With the loss, New York dropped to 28-52 overall and 19-21 at home.

Head to head, the under is 10-2-1 in the last 13 meetings and the Cavaliers are 5-2 ATS in the last seven meetings in New York.

These teams have split two meetings this season with the Cavaliers winning the most recent meeting by 104-101 back on Nov 13 but so many injuries and roster changes have happened since then. The Knicks are really just playing out the rest of the season to get to the NBA draft while the Cavaliers are trying to get back to the third seed in the East. The Cavaliers are 4-0 ATS in their last four games against a team with a losing record and I think that trend continues in this one as the Cavaliers win in a romp.