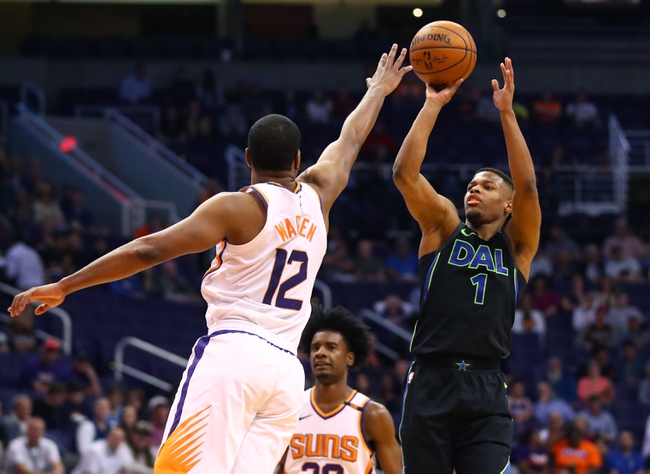 The Dallas Mavericks play host to the Phoenix Suns at the American Airlines Center on Tuesday night.

The Phoenix Suns have been in terrible form as they’ve lost 26 of their last 28 games and they will be hoping to snap a two-game skid after getting blown out by the Warriors in a 117-100 on Sunday. Danuel House Jr. led the team with 22 points on nine of 18 shooting, Alex Len added 16 points with 10 rebounds while Tyler Ulis chipped in with 15 points and 10 assists. As a team, the Suns shot 42 percent from the field and 10 of 35 from the three-point line as they came out firing but were always behind after the Warriors outscored them by 64-50 in the first half. There was just no stopping the Warriors’ Klay Thompson who scored 22 of his game-high 34 points in the first quarter. With the loss, Phoenix dropped to 20-61 overall and 10-31 at home.

Meanwhile, the Dallas Mavericks will be looking to close out a forgettable season on a high note but they’ve lost 11 of their last 13 games and they will be hoping to snap a three-game skid after Sunday’s 109-97 loss at Philadelphia. Harrison Barnes led the team with 21 points on nine of 25 shooting, Dennis Smith Jr. added 20 points with 11 assists while Dwight Powell chipped in with 13 points, 10 rebounds and four assists. As a team, the Mavericks shot 42 percent from the field and 11 of 40 from the three-point line but they were always fighting an uphill battle after falling behind by 13 points going into halftime. With the loss, Dallas dropped to 24-57 overall and 9-32 on the road.

The Mavericks have opened as minor favorites in this one as they haven't quite been as bad as the Suns lately, but it is actually the Suns who will be aiming for the season sweep after winning in both meetings earlier this season. The Suns are also 5-1 ATS in their last six games against a team with a losing record and 7-2 ATS in the last nine meetings against the Mavericks in Dallas, so I'm taking the visitors with the points in a game that could go either way with neither team having anything to play for.