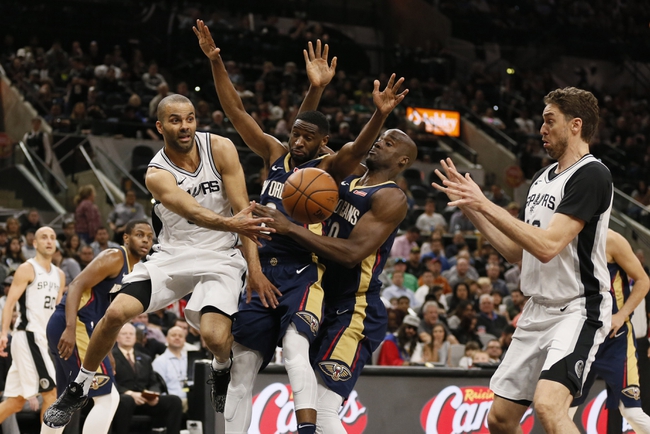 The San Antonio Spurs and the New Orleans Pelicans duke it out at the Smoothie King Center on Wednesday night.

The San Antonio Spurs have been in solid form as they’ve won 10 of their past 14 games and they will be looking to cap off the regular season with a third straight win after blowing past the Kings in a 98-85 win on Monday. Rudy Gay led the team with 18 points off the bench, Manu Ginobili chipped in with 17 points while LaMarcus Aldridge and Patty Mills each scored 15 points. As a team, the Spurs shot just 41 percent from the field and six of 27 from the three-point line as they just couldn’t find their shot until the fourth quarter where they outscored the Kings by 38-19 to make it look easy. With the win, San Antonio improved to 47-34 overall which is currently good for sixth place in the Western Conference.

Meanwhile, the New Orleans Pelicans have been on a nice run as they’ve won eight of their last 12 games and they will be gunning for a fifth straight win after taking down the Clippers in a 113-100 road win on Monday. Anthony Davis led the team with 28 points on 11 of 22 shooting, Nikola Mirotic added 24 points with 16 rebounds while E’Twaun Moore chipped in with 19 points. As a team, the Pelicans shot 46 percent from the field and 11 of 30 from the three-point line as they started hot to lead by 10 points going into halftime before putting the game out of reach with 34 points in the third quarter to lead by 22 points. With the win, New Orleans improved to 47-34 overall which is currently good for fifth place in the Western Conference.

There is so much on the line in terms of playoffs seeding as both teams are currently tied with 47-34 overall records. The Spurs recently beat the Trailblazers before leaving it late against the slumping Kings on Monday while the Pelicans have reeled off four straight wins, three of which came by double digits. The betting trends favor the Pelicans who are 4-1 ATS in the last five meetings and 19-7 ATS in the last 26 meetings at home so that’s where I’m going with this one.